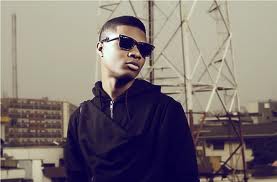 Nigerian star boy Wizkid yesterday refused to announce Dancehall star Samini to partner him to perform their smash hit ‘Time Bomb’ at the third edition of Ghana Meets Naija, a track on the latter’s upcoming album.

According to signals picked, as two headlining artistes, after his performance, Wizkid was to announce Samini with the song and then leave after for the Ghanaian star to close the show.

What really happened? According to sources, Wizkid and his team refused the arrangement because of a beef between Samini and R2Bees who are currently in Los Angeles for the 2013 BET Awards.

The beef between the two Ghanaian artistes is unknown but for Bola Ray, the organizer of the show to intervene means all is not well.

“Bola Ray even went back stage to talk to Wizkid and his manager about it but they refused to perform with Samini.” said a source.

I’m wondering why two artistes representing Northern part of Ghana will be at loggerheads with each other. Couldn’t they settle whatever brought up the beef?

To Wizkid, what’s the solidarity with R2Bees all about? Hmmm!