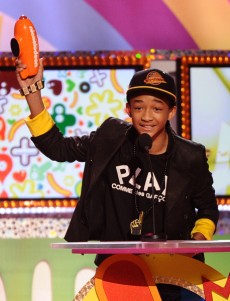 It’s certainly a present that he won’t forget.Will Smith has revealed his son Jaden wants to move into a house of his own for his 15th birthday.

The teen plans to become emancipated – and allowed to live independently from his parents.

But the desire doesn’t mean that relations within family have soured, with Smith explaining his son’s plan is a result of the supportive environment in which he has been raised.

Smith explained: ‘He says, “Dad, I want to be emancipated,” I know if we do this, he can be an emancipated minor, because he really wants to have his own place.’