Who is Gibril da African? An introduction 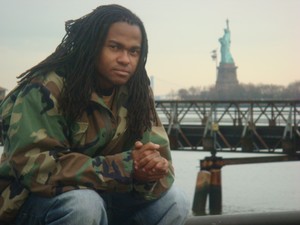 Gibril da African aka Foreign Exchange Hustler is an African hip-hop artist based in Jersey City, NJ. Gibril has collaborated and shared stages with M1 (Dead Prez), Meta and the Cornerstones, Wanlov, Rasta Bubu and has worked with producers QC Fund aka The Streets Number One Producer, Eric Matlock aka Coptic, DJ Child, K Jones, Divided Souls, and more.

Born in Western Africa to a Ghanaian mother and a Sierra Leonean father, Gibril made a dramatic entrance into the world, at a time of great unrest in Ghana. As if to foreshadow his life’s story, in his earliest years, Gibril survived nearly fatal birth complications, and the outbreak of two civil wars in Togo and Nigeria, causing his family to move to Ghana. Often fending for himself at home and on the streets of Africa, Gibril relied on the positive influences of his parents for spiritual and emotional guidance.

At the tender age of twelve, Gibril fell in love with hip-hop and by junior high was writing his own lyrics. Gibril first made a name for himself as an accomplished rapper and dancer on the boarding school circuit in Western Africa. Fluent in seven languages, Gibril’s eclectic fusion of hip-hop, rap, and reggae with English and French vocals has earned him accolades with fans and peers alike. By weaving the story of his life’s journey and experiences into hypnotic lyrics on powerful beats, Gibril spreads his message of African awareness and the need for African solidarity.

“Music is one of the pieces of my puzzle,” says Gibril. “Not only is it my passion but also a very useful tool in my ultimate goal to play a part in the movement to unite the African continent. I know the day will come when we as Africans all over the globe shall stand as one people, join hands, and fly one flag, and till then I will use my talent to push us all towards that day.”

In 2001, Gibril moved to the United States to pursue his dream of transforming his love for music into a full-time career. He traveled the country from Ohio to Illinois to Mississippi before settling in Jersey City, just steps from NYC, the music capital of the world. Throughout his travels, one message has remained forefront “never give up, never forget where you come from.”