Watch: Serena Williams Opens Up Fully As Her Ex-Boo Common Interviews Her 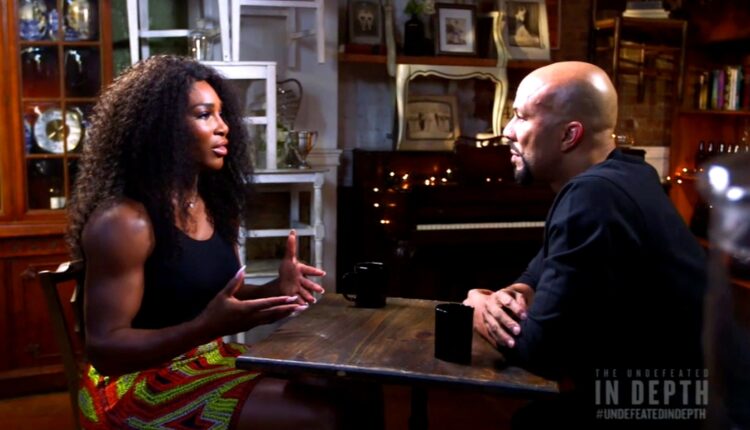 The tennis legend touched on everything from race to her skin color to her body shamers.

Serena Williams sitting down with her ex-boo, Common, for their The Undefeated in Depth: Serena With Common interview Sunday could have been awkward. After all, they are exes, right?

But their conversation was anything but awkward, as it proved to be intriguing, powerful and telling within seconds.

Here, BET.com points out what we learned from the tennis legend’s interview with Common, as compiled from The Undefeated. All hail the queen!

DROWNING OUT THE HATE

“I’m so focused on what I need to do to be the best I can be — and then better. At a very young age, I think I was 17, I stopped reading any press about me. I think that helped me avoid a lot of the scrutiny and I kind of put myself in a bubble. I feel like I definitely was scrutinized because I was confident — I was Black and I was confident. And I am Black and I am confident.”

“A lot of Black people, unfortunately, especially growing up, are discouraged, like, ‘You don’t look good’ or ‘Your hair is not pretty’ or ‘Your skin’s too dark.’ We were always told to love ourselves. My dad always said you have to know your history, and if you know your past, you can have a great future.”

She added, “If you think about what the slave had to go throug, and then the life that we are privileged to live — I wouldn’t want to be any other color. There’s no other race, to me, that has such a tough history for hundreds and hundreds of years, and only the strong survive. So we were the strongest and the most mentally tough, and I’m really proud to wear this color every single day of my life.”

BEING HOPEFUL AMIDST A WAVE OF RACIAL INJUSTICE INCIDENTS

“I do feel like there’s hope. Not everyone is a bad person. The majority of people are good, it’s just some — it’s those few that poison. I also think that it’s so important for society to also not focus on the negative. If you sit around and only talk about negative stuff and negative things and what happened and who got shot, it almost puts that out there and you get that in return. We gotta put out a positive story.”

TO HELL WITH HER BODY SHAMERS

She added, “I’m OK to look them in the eye and say, ‘If you don’t like it, I don’t want you to like it. I’m not asking you to like it. I like it and I love me ….’ They’re entitled to their opinion. They’re entitled to like what they want to like, who they want to like and how they want to like them. That’s their opinion. But I can’t let that influence me or bring me down in any way. Yeah, there was a time I didn’t feel incredibly comfortable about my body because I felt like I was too strong. And then I had to take a second and think, ‘Well, who says I’m too strong?’ This body has enabled me to be the greatest player that I can be, and I’m not going to scrutinize that. This is great. This is amazing. And now my body is in style, so I’m feeling good about it [laughs].

“Obviously, everything I’ve done is because of the help of my sister Venus. But when I started out, I never thought, ‘I want to open up doors for Black athletes,’ and then to female athletes. I ended up on this path and people started looking up to me and it was different, because I was like, ‘I’m just doing me.’ And people were starting to appreciate it; I was, like, ‘Wow, OK, that’s kind of cool.’”

“I think if I were a man, I would have been in that conversation a long time ago. I think being a woman is just a whole new set of problems from society that you have to deal with, as well as being Black, so it’s a lot to deal with — and especially lately. I’ve been able to speak up for women’s rights because I think that gets lost in color or gets lost in cultures. Women make up so much of this world, and, yeah, if I were a man, I would have 100 percent been considered the greatest ever a long time ago.”

“I don’t have fear. I have nerves. I’m not really fearful — not in my job. Now, I’m afraid of a lot of other things. I don’t like heights, I don’t like frogs, but in my job, I’m not really fearful. I think it’s very challenging sometimes to be in my position because I do influence a lot of people, a lot of people do look up to me and it’s so many times I have to take the higher road. It’s not always easy. That is very challenging because sometimes when things are blatantly wrong and blatantly unfair and blatantly racist or sexist or just downright wrong. I just have to go and put [on] a brave smile and not let anyone know how I feel on the insid so they don’t get that satisfaction. Even though inside I could be dying. That’s very challenging.”

Video: Lord Paper does it again at YFM Loud in Gh