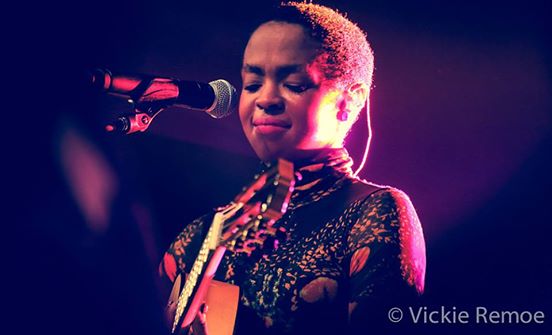 In as much as I wished I was present to update you as to what happened during this year’s Afrobeats festival, I couldn’t make it but Wanlov the Kubolor does a review and a special one on the performance of legendary performer, Lauryn Hill.

Read from below what the “Kokonsa” hitmaker wrote;

Miss Lauryn Hill is a god that many have tried to kill with their selfish words over the years…saying stuff like “she has lost it”, “she’s not pleasing the fans”, etc…I started to believe them till I recently read a piece by Talib Kweli that made me realise she was like me…she does not like doing what people expect of her…it makes her craft dull to her to her real fans over time.

Last weekend I got to confirm this assumption for myself thanks to the 2nd Annual BBNZ Afrobeats 3-day Festival sponsored by Club Beer. Before I get to Lauryn’s performance I must say I really enjoyed my performance, but not as much as the crowd did. Also I was so happy to meet MI Abaga & hear him perform on stage with XO Zenavoe, I loved what EFYA wore so much and was sad she performed late, even though she was the perfect closer to the festival, and I cut my foot on glass because I got way too turnt up when Sarkodie came on stage right after Lauryn Hill so I watched the rest of the performances from a chair as I lost one calabash of blood.

Before I get into Miss Hill’s set let me give you some secret info…One week before Lauryn had to be in Ghana her band leader died and the whole band cancelled on her so the guys at BBNZ had to book Lauryn a new band and fly them to Accra. On arrival one of the new band members fainted at the Airport in Accra, but came to shortly after. The next two days up to the night of their performance were full of constant rehearsal as this band was new to Lauryn. So there was no rest from arrival in Accra till Lauryn got up on stage at about midnight on Sunday and stunned us with a two hour tornado of sound and movement that all who saw will never forget.

She came on stage in dark thigh-high high heeled boots covered in golden bohemian butterfly-ish henna, a dark knee-length huge flower african print umbrella skirt and a dark long sleeved african print stretch turtleneck. Her hair was short and hers and she looked serious and beautiful. Chale she commanded the stage from pih! Go!!

As the band hit us hard with music, she rap/sung her lyrics with free jazz signature top speeds fitting 6/8 raps into 4/4 beats and vice versa plus more techniques I will learn how to explain one day. She kept looking over her shoulder from time to time to correct the sound guy or the band till she was satisfied with them. Just as I begun to feel she was rushing through her set she slowed things down a bit to connect with her audience taking a 5 minute break to go and bring her acoustic guitar. We sang along to all her songs and later the hip-hop heads amongst us like Shocker went crazy when she begun to perform stuff from Fugees because the songs sounded just like they did when we were in high school and the way she walked back and forth on the stage crouching and rapping in true mc fashion sent us into a frenzy as we screamed the lyrics along with her. Towards the end of the set she went into Reggae mode and did a couple of Bob Marley covers. I am not a big fan of Reggae and even more of other musicians doing Reggae covers, but I enjoyed Lauryn’s renditions immensely. She ended her set with “That Thing” and we went crazy especially because she was trying to mess up our plans for the night by telling the girls what some of us are about

I have seen many rappers and singers on various stages in my lifetime from all over the world and let me just say they will all fit comfortably in Lauryn Hill’s back pocket. She is a god.

I keep thinking I heard Lauryn sing “I was embarrassed by Ghana’s crowd”, but maybe twas just a slip of my ear

Nature brought me and Nana Ama McBrown Together …. – Okyeame Kwame