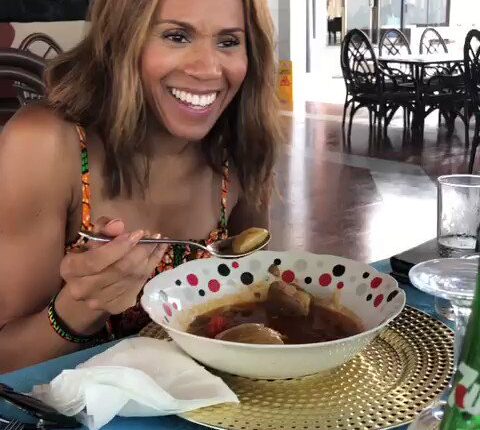 This comes after the musician shared a video of herself enjoying one of the Ghanaian dishes fufu (pounded cassava and green plantain).

Although fans are excited about her experience, they wouldn’t have it especially as Deborah Cox  is seen ‘chewing’ the fufu instead of swallowing it.

Another thing that caught the attention of many was the fact she  was seen enjoying the fufu with a spoon! (That is ethically wrong right?)

Well, according to some followers and fans, that goes against the ‘etiquettes’ of  the highly rated dish.

Check out the video from below.

Deborah Cox was in Ghana for the  Ghana World Music Festival which took place at the Fantasy Dome in La, Accra.

Check out some of the hilarious comments from below.

I had to pour libation to apologise to our ancestor for this. Please eat fufu with your fingers not a spoon, and for the love of the gods dont chew. It is disrespectful to those who pounded if you chew. Pounding is to eliminate the need to chew. Swallow.

Why the Spoon though?

You should have used your hands. Next time you will enjoy it licking your fingers after the Fufu

It's quite nice but you'll enjoy it eating with your hand