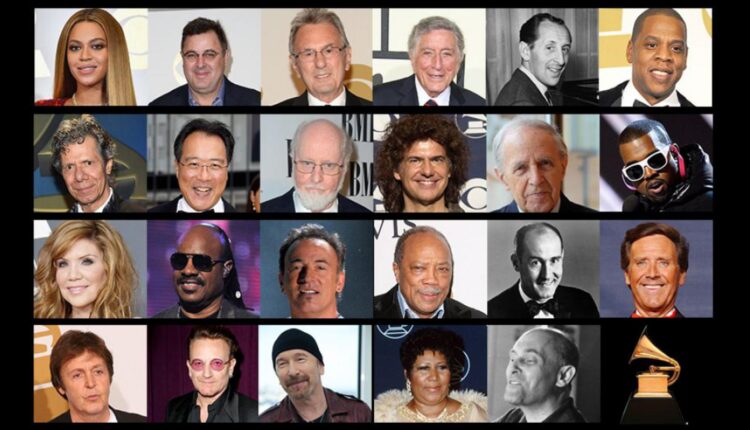 From Georg Solti to U2 and Beyoncé, these are the top 22 winners in GRAMMY history through the 60th GRAMMY Awards. (Remember, this year’s edition marks the 62nd)

With a total of 84 categories celebrating the best of pop, rock, R&B, jazz, classical, Spoken Word, Musical Theater, and Music For Visual Media, among others, thousands of music creators have been recognized by the GRAMMYs since its inception in 1957.

The prestige of one GRAMMY win can catapult an artist’s career to the next level, but there are some who have amassed more than 10, 20 and even 30 career GRAMMY wins.

Ever wondered who these elite GRAMMY winners are?

Below, the Grammys has compiled a list of the top 22 GRAMMY winners of all time.

Not only does the late conductor  Georg Solti  hold the record for the most GRAMMY Awards won in any genre with 31, he has the most wins in the Classical Field. Solti’s last win was for Best Opera Recording for Wagner: Die Meistersinger Von Nurnberg for 1997.

Quincy Jones‘ GRAMMY career as an artist/arranger/producer spans more than 10 Fields, from Children’s to Jazz, Pop, Rap, R&B, and more, including his recent win for Best Music Film at the  61st GRAMMY Awards. He is also one of only 15 artists to receive the GRAMMY Legend Award.

Alison Krauss  holds the distinction as the female artist with the most GRAMMYs, and the female with the most awards in the Country Field. Krauss shares 14 of her wins with her backing band of nearly 30 years, Union Station.

The late virtuoso pianist/composer  Vladimir Horowitz  earned GRAMMYs in every decade from the 1960s to the 1990s. He was also awarded a Recording Academy Lifetime Achievement Award in 1990 and has five recordings in the GRAMMY Hall Of Fame.

No stranger to the GRAMMY stage, Stevie Wonder  is the only artist in GRAMMY history to win five or more awards on three separate nights. His career and GRAMMY history were celebrated on the television special “Stevie Wonder: Songs In The Key Of Life — An All-Star GRAMMY Salute” in 2015.

John Williams  has cashed in on cinema soundtrack classics such as Jaws,  Star Wars and  Schindler’s List for a place among the GRAMMY elite. Of his 24 GRAMMY wins, Williams has earned 12 in the Music For Visual Media Field and six for his work on the Star Wars franchise. His most recent win came at the 60th GRAMMYs for Best Arrangement, Instrumental Or A Cappella for “Escapades For Alto Saxophone And Orchestra From Catch Me If You Can.”

Who run the world?  Beyoncé. The 22-time GRAMMY winner holds the second-most wins by a female artist and is tied with Adele at six for most GRAMMY wins in one night by a female. Aside from her wins, Queen Bey has amassed 63 GRAMMY nominations, more than any other female artist.

Led by frontman Bono,  U2  hold the record for most GRAMMY wins by a rock act. Their most recent wins came in 2005, including Album Of The Year for How To Dismantle An Atomic Bomb.

Singer/songwriter  Vince Gill  has earned 20 of his GRAMMY wins in the Country Field, the most of any artist. He earned his first GRAMMY outside of the Country Field in 2017 for Best American Roots Song for writing the Time Jumpers’ “Kid Sister.” He also holds the distinction of garnering the most GRAMMYs in the 1990s (14), winning one or more GRAMMYs in every year of the decade.

Tied for the most GRAMMY wins by a rap artist, Jay-Z  has wins in each of the four Rap Field categories. Hova’s blueprint for GRAMMY success includes collaborations with other artists such as Beyoncé (“Drunk In Love”), Rihanna (“Umbrella”) and Justin Timberlake (“Holy Grail”).

The composer behind TV and film themes such as “Peter Gunn” and “The Pink Panther Theme,” the late  Henry Mancini  made early GRAMMY history with a then-record five wins in one night for 1961. Mancini’s popular “Moon River” and later “Days Of Wine And Roses” each won both Record and Song Of The Year.

Working on projects by artists Ray Charles, Natalie Cole, Chick Corea, and Paul McCartney, among others, Al Schmitt  won his 20 GRAMMYs as an engineer/mixer. Schmitt has also earned two Latin GRAMMYs and he received the Recording Academy Trustees Award in 2006.

In addition to GRAMMY wins in every decade from the ’80s through ’00s, Bruce Springsteen  has seen his albums Born To Run and Born In The U.S.A. inducted into the GRAMMY Hall Of Fame. In 2013 the quintessential rocker was honored as the  MusiCares  Person of the Year.

An artist who truly seems to get better with age, Tony Bennett  has won nine of his 18 career GRAMMYs since 2002. Including his 2015 win with Bill Charlap for The Silver Lining: The Songs Of Jerome Kern, Bennett has earned Best Traditional Pop Vocal Album honors 13 times, the most in the category’s history. Aretha Franklin  reigns as the queen of R&B. She has 18 GRAMMY wins to date, five recordings in the GRAMMY Hall Of Fame, a Recording Academy Lifetime Achievement Award (1994) and a GRAMMY Legend Award (1991).

Cellist  Yo-Yo Ma has strung together 18 GRAMMY wins, earning his first in 1984 for Bach: The Unaccompanied Cello Suites.  Since then he’s won GRAMMYs in the Folk and World Music Fields, the latter of which came for 2016 for the Best World Music Album-winning project with his Silk Road Ensemble, Sing Me Home.

Winning Best New Artist with the Beatles for 1964, Paul McCartney  has gone on to earn 18 career GRAMMYs as an artist, composer and arranger. While most of McCartney’s GRAMMY history lies in pop and rock, he earned two 58th GRAMMY nominations  for Best Rap Song and Best Rap Performance for Kanye West’s “All Day” with Theophilus London and Allan Kingdom.

Out of the 25 GRAMMYs ever awarded for polka, Jimmy Sturr  earned 18 of them, including 13 wins for Best Polka Album. He will likely remain the highest GRAMMY-winning polka artist in history (given the discontinuation of the category), and was “Born To Polka.”