Editorial: The Nonsense With KUMAWOOD Must Stop – NY DJ 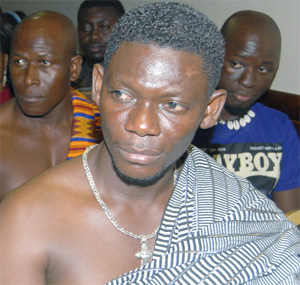 Not too much a fan of these local Akan movies which for the purpose of this editorial I will call “KUMAWOOD” movies and I guess that really rings a bell but I feel the craziness in that part of our industry must seize.

For some time now, many critics have called for stringent measures on some of these local movies which I, on the other hand had consistently  opposed thinking we could witness a change but to date, that change has not be materialized. Even at tough times when many had called for the abolition of the KAM & Akoben Awards, I vehemently stood solidly behind the organizers and advised they contacted very good event organizers to handle the next awards since the idea behind the creation of the awards was a great one. As we often say, “Intents might be genuine but execution could mar the whole idea”.

I don’t know if you are already getting bored since I have not touched on what I really want to discuss. Anyway, don’t be since I’m just about commencing.

What could have broken the camel’s back to call for this editorial? As I sat behind the TV scanning through free to air TV stations, my attention was drawn to one Akan movie advert that was being telecast with title “Akrante Nkwan” literally meaning “Grass cutter Soup” and guess what? The first thing that came to mind was OMG!!! Have we gotten to this?? Have we really gotten to the situation where movie producers would take us for a ride with just any crap? Well, you might say I have an option to buy it or not but I believe you trust that I would do a great editorial on this subject that’s why you are steadily reading this.

The Akan movie industry popularly known as KUMAWOOD has for the past six or seven years seen some of the worst scriptwriters, movie producers with virtually no knowledge on what they do but for their money coupled with very insulting movie titles, bad sub titling and of course, the Alpha and Omega of it all, insults and abusive language.

The very question I ask then is “Where did we go wrong?” It is not a fallacy that on a scale of 1 to a 100, 90% of Ghanaians would choose “I told you so” over “Azonto Ghost” or that annoying one “Akrante Nkwan”.

Where Did The Insults and Abusive Language Start?

A recent interview with Mr. James Aboagye, a renowned movie producer on the 30th of May 2013 as NYDJLive celebrated the 11th year anniversary of the passing of Bob Santo revealed that Bob Santo saved the Akan movie industry but perhaps at a cost. Why do I say that? It can clearly be recalled that Bob Santo despite his comic nature had the twist of insults to his comedy; a character identified in the likes of Agyaa Koo, Kwadjo Nkansa Liwin and perhaps Kwaku Manu.

Bob Santo’s inclusion into the movie world was because his impact in the then “Keysoap Concert Party” was huge deterring many cinema goers from visiting their popular cinemas where movie producers made their money therefore a resolution to involve him in the movies; a venture which brought in so much profit to movie producers. Since then, it has become a norm for movie producers to cast “concert party actors” who can insult to make money, the reason for our current crisis.

With issues of bad movie titles, subtitling, lack of creativity in writing great scripts and the decision to cast content based movies, I leave you all to judge hoping something better would come forth but until then, the nonsense in the KUMAWOOD industry must stop.