The Day Flowking Stone Practised As A Biochemist 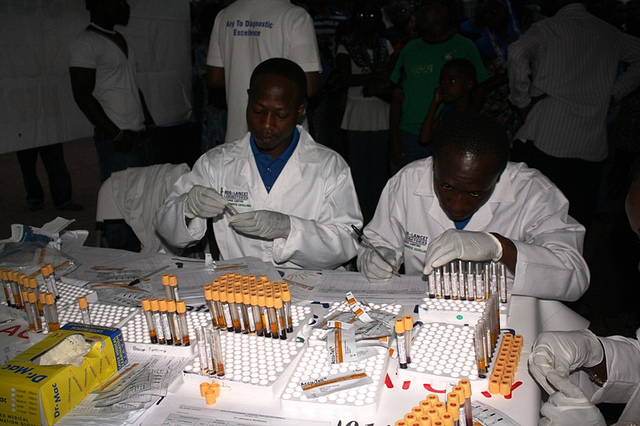 I am one of the very few people who pick on artists and their lines; a move which has had so many tag me as an enemy to some Ghanaian artist. I will not mention any name for now but I was interested in putting this up because I wrote my own review on “My longest Flow” Read from and here (Review My longest Flow by Flowking Stone) and was therefore obliged to buttress it after laying hands on this image.

He might have said it in his longest flow; a recent mixtape released but might was met as one of the regular braggadocio by rap artists. “Me nni hwee koraa na 3ny3 me tertiary certificate”. “Biochem koraa m’ay3 na 3ny3 rap a 3y3 m’abusua agyapade3”

However, this was not one of the empty rap lines as the Oseikrom based rapper exhibited to the world what he actually meant with those lines when he joined his brother Okyeame Kwame on his hepatitis B campaign to fully practice a profession he long qualifies for; a biochemist.

Graduating from the Kwame Nkrumah University of Science and Technology in 2007 with honours in BSc Biochemistry, the flowking might just be putting in use his knowledge acquired from the University.

Congratulations to the flowking Stone and I guess this is a good example to many upcoming artists to better consider education alongside anything else.