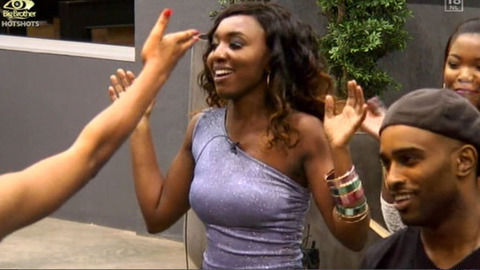 Laveda’s soothing saxophone performance has earned her the first Head of House title of the season.

Laveda played her saxophone with grace, immediately warming the hearts of the studio audience who expressed their appreciation with a generous 85% of the votes. Just as the housemates were settling into their brand new abode, Big Brother’s booming voice filled the house and as expected, that provoked a lot of excitement and the new members were simply uncontrollable.

Speaking of the various performances, Big Brother said some housemates had shone like stars while others still need a bit of scrubbing here and there.  It was when Big Brother mentioned that the top scoring housemate will win the title of HoH and the rest are up for possible eviction. The Top 6 Hotshots were Laveda 85%, Sabina 78.3%, Arthur 77.5%, JJ 72.6%, M’am Bea 72.5% and Lilian 69.4%.

M’am Bea, JJ and Lilian had the lowest votes of the six and Big Brother asked them to sit down. This left Laveda, Sabina and Arthur awaiting their fate, and it was Laveda’s time to shine. This means that all the housemates are up for possble eviction this week excluding Laveda by virtue of being the HoH.

Once Big Brother was done with that big announcement, the housemates found it befitting to toast to their new Head of House.