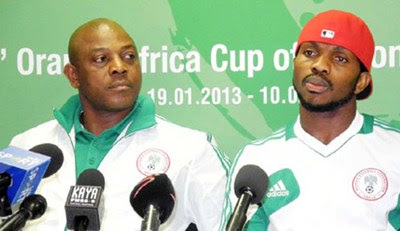 After an unsuccesful attempt at the World cup, Super Eagles coach Stephen Keshi and National team captain Joseph Yobo are said to have quit, Vanguard reports.

Speaking this evening after the Eagles’ loss to France in the round of 16, Keshi said it was time to move on.

“I have to go back to my family and face fresh challenges,” Keshi said.

Eagles Captain, Yobo Joseph also said he’s had enough and can go no further as national team player. “I think I should give the younger ones the opportunity to forge ahead. I have nothing new to offer.”

Dashing Photos: Check out Nicki Minaj’s outfit and performance at the BET Awards