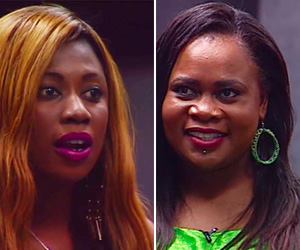 After seven weeks of entertaining Africa and their fellow Chasemates with sexy dance moves, cleaning and brawls, Selly and Natasha’s luck has finally run out.

This stunning news seemed to take the Chasemates off guard. Why wouldn’t it considering that Natasha has been saved from the Eviction gallows many times by Africa’s vote.

The Malawian’s final Diary Session earlier this evening was more than cryptic. “Sometimes your luck runs out”, she said. And sadly, it has! All the pretty Malawian could do when she heard the news was to look on in stunned silence. Clearly her cleaning strategy, nor her fun Airtel Show could save her.

Selly on the other hand had to contend with the bewilderment of hearing Oneal had saved Elikem and put her neck on the chopping block instead. Before she had even had a chance to process that information, IK called curtains on her Chase race.

This Eviction caps a difficult week in the game for the Ghanaian, who has had to navigate treacherous waters in both the Ruby and Diamond Houses, following a massive fight with former love interest, Sulu. Luckily the two buried the hatchet when Sulu told her “When other people saw rubbish, you looked at me and saw something precious”. Before the dust had settled following her swap to the Diamond House on Friday, Selly and former flame, Nando, had a brawl of epic proportions.

Nevertheless, after all is said and done, the two gorgeous divas have a lot to be proud of. Reaching and exceeding The Chase’s halfway mark is no ordinary feat.