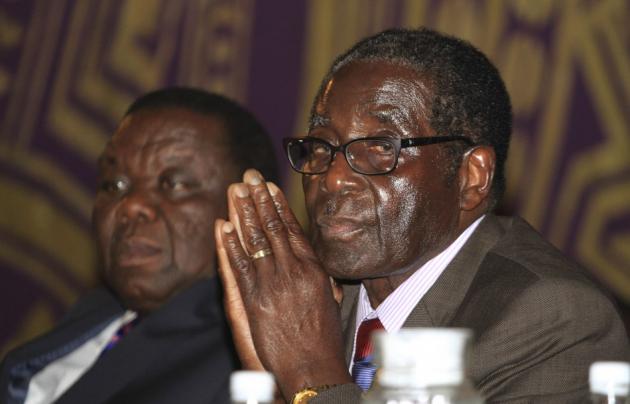 Aging Zimbabwean President Robert Mugabe has a reputation for blasting his critics in political speeches that often ramble to the point of incoherence, but recent reports that he delivered a curse-laden speech calling former South African President Nelson Mandela a “coward” and an “idiot” have missed the mark. Mugabe, 89, just won a national election against his long-time political opponent Morgan Tsvangirai. The autocratic president has ruled Zimbabwe for 33 years, and was quoted by the Daily Currant as saying that he planned to stay in office for another quarter century.

Mandela, 95, is hailed as an icon for his role in helping to end apartheid in South Africa. He’s hospitalized in Pretoria to receive treatment for a lung infection, and the world is keeping a close eye on the ailing leader’s slow recovery. Mugabe himself was once widely respected for fighting to overthrow white rule in his own country, but his reputation has suffered greatly since he took power in 1980 — and so has Zimbabwe’s development. “I am the greatest African who has ever lived,” Mugabe said, according to the Daily Currant article. “The world should love me more than the idiot Nelson Mandela. F–k Nelson Mandela. As I waged war against colonialism, that coward sat on his a– in prison for 27 years. He’s a coward. I have been leader for 33 years. Mandela was president for five years. What kind of idiot gives up political power? Great leaders like me know how to stay in power.”

Outlets such as IndepthAfrica and Codewit World News ran with the story — but as it turns out, the Daily Currant specializes in satirical news. The American parody website has previously fooled a few major newspapers –for instance when it reported that former U.S. vice presidential candidate Sarah Palin wanted to invade the Czech Republic or that conservative pundit Ann Coulter refused to board an airplane with a black female pilot.

The Mugabe article came at a good time. Following the election last week, which many observers in Zimbabwe and abroad saw as rigged, critics of the president are clamoring for news that will discredit him. The false story is still making the rounds on Facebook and Twitter. Then again, the content of these comments isn’t entirely out of left field. Several South African news outlets, including IOL News, reported in May that Mugabe called Mandela “too much of a saint” for instituting policies that helped both black and white citizens. “Mandela has gone a bit too far in doing good to the non-black communities,” Mugabe said, according to the reports.

Mugabe has made black rights a central tenet of his political philosophy, but the results have been less than encouraging. His land reform program, which kicked into high gear in 2000, saw thousands of white farmers forced off their land, often violently.

Though an estimated one million black Zimbabweans have indeed been granted plots of land to call their own, the program did little to spur growth and development in a country where poverty rates are still above 50 percent; it’s widely considered a disastrous initiative.

Mugabe also champions an indigenization law mandating that black Zimbabweans must own 51 percent of the shares of foreign corporations operating within the country, though the rule is hard to enforce given the logistical difficulties involved. The president increased the pressure on noncompliant companies this month, which most analysts pegged as an effort to boost his popularity ahead of the pivotal poll.

Given that context, it’s perhaps no surprise that several news outlets didn’t question the veracity of the Daily Currant story — though they might have taken pause with other statements attributed to Mugabe in the article, including an assertion that the color white had been outlawed. “There is only one color allowed in Zimbabwe, and it is black,” said Mugabe in the parody piece. “I banned the color white in my country.”

My Dad Always Wanted Me To Be A Lawyer – Becca