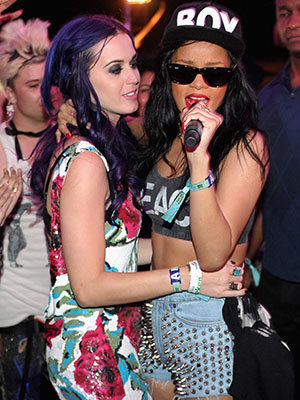 There don’t appear to be any signs of friction between friends Katy Perry and Rihanna.

Rumors had bubbled for months that Perry wasn’t happy with her fellow pop star BFF because she was back together romantically with Chris Brown. Perry didn’t sit near the “Stay” singer at the Grammys back in February, choosing to sit with Brown instead.

However, in a new Twitter exchange on Wednesday, the girlfriends emphasized that they’re definitely back on track … and with some exciting upcoming plans!

Leave it to Twitter to settle all scores. The first sign that there wasn’t actually a rift in their friendship came when Perry wished Rihanna a happy 25th birthday on February 20, just a week after the Grammys.