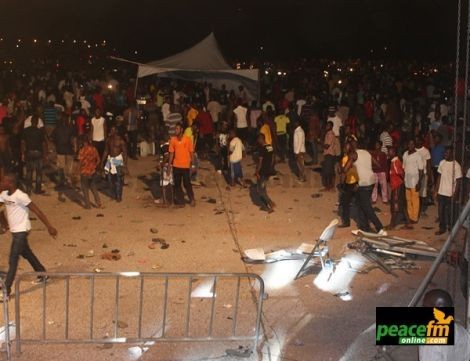 The irresponsible attitude and unprofessional use of excessive force by some police officers turned an exciting event into violence last Sunday April 6, 2014 at the forecourt of the Tamale Sports Stadium during the Ghana Music Awards 2014 nominees jam.

During Sarkodie’s performance which was the last on the night when the excitement has heightened and the crowd was just having fun watching their star, the police for reasons best known to them, decided to use pepper spray, sticks and shockers to forcefully push the crowd who were nowhere close to the stage back for no provocation or any act of violence whatsoever from the crowd.

Sarkodie who was on stage when the whole unfortunate incident started pleaded with the police several times to stop and allow his fans to enjoy the show but that clearly fell on deaf ears.

The police went on pushing the crowd back until the crowd also decided to retaliate by throwing stones, sticks, chairs, shoes and anything they laid their hands on, to defend themselves. This needless confrontation between the police and the crowd caused commotion and abruptly ended the show.

Unconfirmed number of people collapsed during the stampede and several people including this reporter, CEO of Charterhouse Mr. Ayoade, Nii Aryetey Hammond and other workers of Charterhouse were almost blinded with pepper spray.

Below is an exclusive unedited graphic video detail of what really happened over the weekend in the Northern regional capital to whom it may concern.