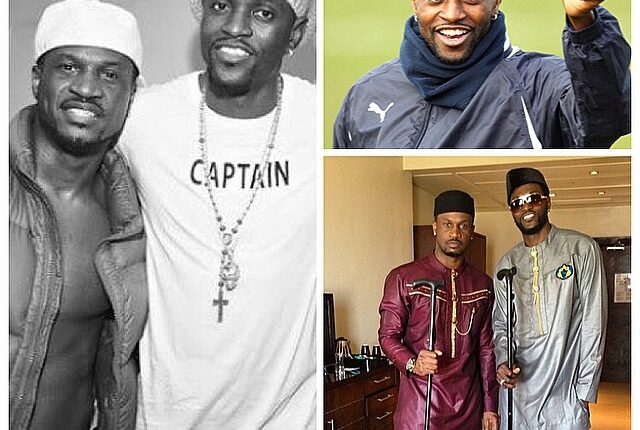 Tottenham forward, Emmanuel Adebayor’s expose on his family’s ungrateful attitude has got so many people talking. With opposing opinions, some believe it was unnecessary for the footballer to have shared the lengthy development with the public while many others believe the Togolese international did the right thing and have commended him for his bravery.

In a post dated Tuesday May 5 2015, Emmaneul Adebayor disclosed his family has been very ngrateful despite all the efforts at making them the happiest in the world.

In case you missed it, read from here >>> Emmanuel Adebayor opens up on family troubles |Says they have shared all his properties although he is alive

Commending him for his bravery, half of award-winning Nigerian music group P Square, Peter Okoye, said Adebayor’s story is one of many that is happening in so many African homes. He stated pressure is always mounted on the most successful individuals in African families, a practice he believes must be addressed.

“Thank you for sharing your story bro, that was very brave. Indeed as Africans, the pressure is always on the most successful in the family and it hurts when your efforts are not appreciated and belittled. Truth is, you owe no one. Your family should be proud of you and not condemn you. I’m so proud of you bro. Remain blessed.”

Over the past few years, Adabayor’s family led by his mum and sister have granted several radio and newspaper interviews lambasting the footballer for ignoring and abandoning them.