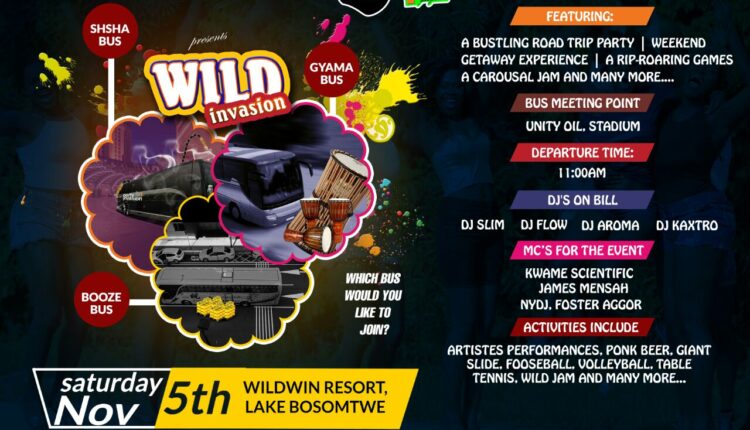 Party Invasion, a nomadic entertainment crew that aims to create unforgettable experiences, promote art, culture and tourism with informative entertainment initiatives together with Ghana’s number one urban radio station Y102.5FM is set ready to set Kumasi on fire with a first of its kind weekend getaway experience at the Wild Invasion Party.
Follow @nydjlive

The Wild Invasion Party which takes place at the Wildwind Resort, Lake Bosomtwe on the 5th of November 2016 is expected to be full of fun with several activities such as dance competition, tug of war, spoon race, ponk beer, wild jam, gaming rooms, treasure haunt, fooseball, giant slide, Zorball, table tennis, volleyball and many more throughout the day.

The lakeside event which is expected to later turn into an all night jam session with the hotsquad from YFM promises an unforgettable experience. DJs expected to be present include DJ Slim, DJ Floo and DJ Aroma.

According to organizers, measures have been put in place to transport interested party goers to and back from the event grounds. They reveal the exciting part of the in-bus road trip is the availability of 3 different buses designed to suit the various patrons.

The buses include the Shisha Bus, Booze Bus and the Gyama Bus.

With rates pegged at GHC35 for singles, a group of 5 has the pleasure of paying only GHC150.