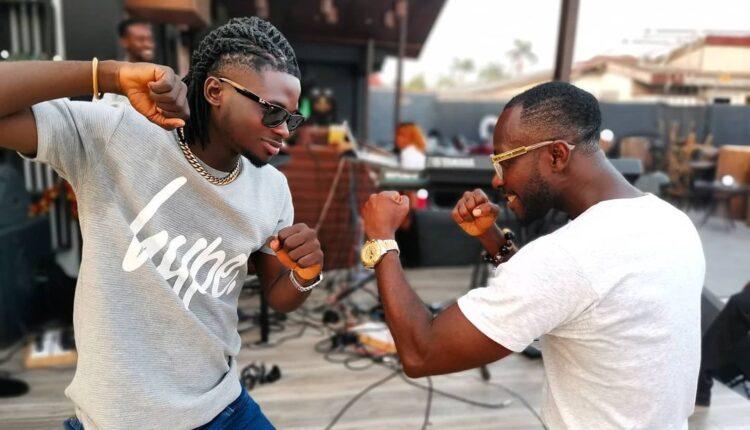 Currently sitting on top of the country’s music charts with their monster hit single Yeeko, Ghanaian rap artiste Okyeame Kwame has a word for his collaborator and friend Kuami Eugene.

The musician who in a recent video is all appreciative of Kuami Eugene for gifting him a hit song still has a request.

Just like Oliver Twist, Okyeame Kwame wants more and has therefore requested Kuami Eugene to assist him with one more single or he (Okyeame Kwame) records a diss song for him (Kuami Eugene)

In the video, Okyeame Kwame is heard saying;

“On my promotional tour, I kept telling people the song was done in 30 mins because you had done everything when I came into the studio. I must admit you’ve done well. I’m doing all this so you gift me with another one. If you don’t gift me another one next week, I’ll record a diss song for you (they both laugh it off)…”

Watch the video from below. (From 4th minute)

Released on Jan 13, 2021, the visuals to Yeeko is the first in Ghana to hit a million views on YouTube in the new year. It also made achieved a similar feat of being the first Ghanaian song released in 2021 to hit a million streams on Audiomack.

Watch Yeeko visuals from below.

WATCH: Edem Teams Up With Sarkodie, Efya On “Favour”

Listen Up! Your Entire Career Won’t Match Up To My Single Hit – Guru Disses Kuami Eugene

Your Beefs Are More Engaging Than Your Music, Are You A Butcher?…