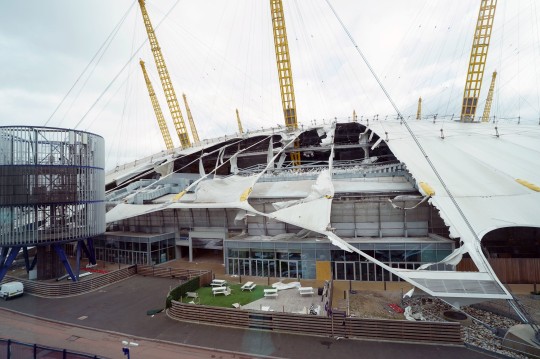 Large sections of the roof at the O2 Arena have been torn off by the storm bringing havoc to much of the UK.

More and more of the Dome is being shredded pic.twitter.com/EUgyH2ryvK

Storm Eunice has seen winds of up to 122mph in parts of southern England, with forecasters warning that it could be one of the UK’s worst storms in 30 years. Buildings have been damaged, bridges closed, train networks shut down and multiple accidents have been reported on the roads.

A construction site on the seafront in Southend has been badly damaged, according to reports, and the cranes in the Queen Elizabeth Olympic Park in Stratford are said to be swaying like ships’ masts. Fortunately, work on the site has been suspended for the day.

Images on Twitter show the glass-fibre fabric roof of the O2 Arena being shredded, with large sections flapping in the wind.

The arena, which was built by Sir Robert McAlpine and engineered by Buro Happold, is the eighth largest building in the world by usable volume and the largest of its type.

Originally built to host an exhibition celebrating the arrival of the new millennium in 2000, it was rebranded as the O2 Arena in 2005 and opened two years later following a £600m redevelopment. It regularly hosts major concerts for up to 20,000 people.