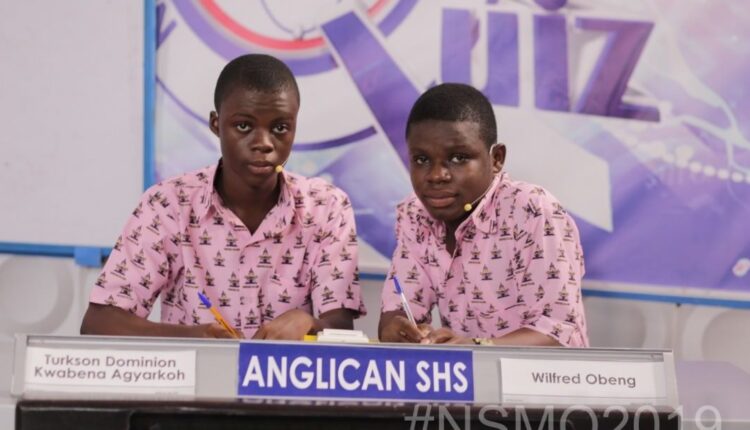 Primetime, organizers of the much patronized National Science And Maths Quiz have responded to an Alleged unfair treatment meted out to Kumasi Anglican Senior High School (KASS).

In a statement released hours ago, Primetime says;

“Our attention has been drawn to some accusations against Primetime on an alleged unfair treatment meted out to Kumasi Anglican Senior High School (KASS), during their one-eighth stage contest of the 2019 edition of the National Science & Maths Quiz (NSMQ), which featured Opoku Ware School and Osei Kyeretwie SHS.

According to the rules of the competition, if a school has a complaint, they are to immediately inform the NSMQ Production Supervisor of the issue during that particular round. The Production Supervisor would then refer the issue to the NSMQ Consultants, who would deal with it in consultation with the Quiz Mistress for a resolution before the contest would resume. No complaint made after the end of the contest when the results have been declared would be entertained. This is a cardinal rule that has been communicated to all participating schools at both the regional and national level via letters to schools, the Information Bulletin for Participating Schools and the brochure for the Launch of NSMQ2019, both of which were given to the participating schools on arrival and registration for the competition.

Before the contest commences on each day, we make it a point to remind the competing schools that if at any point in time during the contest, a school has any complaints, they are to make that known immediately to the Production Supervisor and on the day in question, this rule was re-echoed to all present to watch Contest Six (6) of the one-eighth stage of NSMQ 2019, featuring Opoku Ware School, Anglican SHS, Kumasi and Osei Kyeretwie SHS.

With regards to Wilfred Obeng of KASS providing an answer, 15, to a question, the Quiz Mistress awarded partial credit of 2 out of 3 points to KASS because the answer she was expecting was 15.0. In fact, she went ahead to ask the contestants what the right answer should have been, to which the contestants mentioned 15.0, an acknowledgement that they knew the difference between both figures. No teacher from KASS protested because they agreed that the Quiz Mistress, Dr. Elsie Effah Kaufmann, was right since the question demanded that the answer be 15.0 and NOT 15. This has been a regular lesson on significant figures for both contestants and teachers.

With the “Problem of Day”, the Quizmistress, after analysing all the solutions presented by the competing schools, awarded the points as were deserving. The point about an NSMQ Consultant pointing out that Opoku Ware School missed three (3) steps in the solution they provided is factually inaccurate. In fact, three main steps were required by the question and that was what the team from Opoku Ware School provided. At no point during the contest did teachers of the competing schools and especially KASS, raise any concern about the grading of the Problem of the Day. Our team of Consultants have, on occasion, made some interventions that have resulted in schools losing, or gaining precious points and if, indeed, the alleged Consultant did notice an error, he would have made an intervention.

During Round Four (4), a question was posed to Opoku Ware School and as is expected, the contestants were supposed to raise their hands and be called upon to provide an answer. A review of the contest showed that when the timekeeper’s bell sounded to signal the end of Opoku Ware School’s time, Cornelius Osei Owusu, one of their contestants, had slightly raised his hand. The Quiz mistress thus sought confirmation, not from the audience, but from the Time and Score Keepers, who indeed signalled her that the contestant’s hand had been raised slightly. This offered the team from Opoku Ware School the opportunity to answer the question, which they answered rightly. At this point, NO TEACHER from Kumasi Anglican SHS or Osei Kyeretwie SHS raised any concern, or protest to this situation.

We wish to reiterate that with reference to all the issues raised herein, at no point in time did any teacher from Kumasi Anglican SHS, or Osei Kyeretwie SHS ever lodge any complaint/protest, as allowed by the rules of the competition. The contest, thus, ended and the final scores were declared. This meant that all the competing schools had accepted the proceedings and final score of the contest.

For the past 26 years, Primetime’s primary objective of producing the National Science & Maths Quiz, has been to promote the study of Science and Mathematics in Ghana’s Senior High Schools, while promoting healthy academic rivalry among the schools. This means that we expect participants in our programme to respect the tenets of healthy competition and good sportsmanship and to learn to accept defeat graciously. This is the hallmark of true champions.

Primetime has maintained a very high standard of fairness, and created a level playing field for all schools. This programme has come this far by dint of hard work, diligence and fairness to all participants. We are firm believers in the ethics of rewarding merit and, therefore, wish to place on record that Primetime has absolutely NO INTEREST whatsoever, in favouring any school to win a contest, be it at the Regional, or National level.”

Kumasi Anglican Senior High School (KASS) were kicked out of the competition at the 1/8th stage having secured 51 points, just a point behind Opoku Ware Secondary School.

StarTimes Encourages Customers To Resort To Online Recharge Amid…