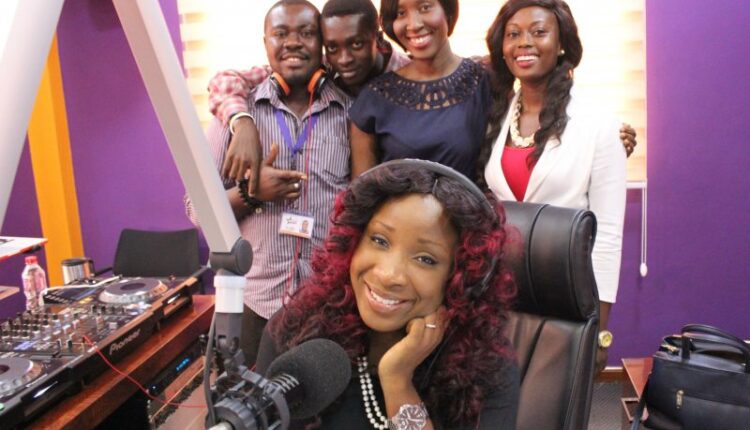 With the right mix of charm, clout and grace, Naa Ashokor is making amazing accomplishments on radio given the relatively short amount of time she has been on the air.

The incisive bubbly host of The Zone on Starr 103.5FM was more known for her roles in Ghanaian movies and TV shows before joining the EIB-owned Starr FM in August 2014, but has now become the goddess of the radio airwaves.

Making the adjustment from TV to radio was “quite unsettling”, she admitted but Naa found her feet quicker than one would expect, and she said she is enjoying every bit of the attention she is getting, as well as the impact she is making on radio. “I have been on radio for several times but only as a guest. Radio is different from TV.

With TV you direct and present at the same time but radio is magical: you sit at one place and speak and the whole world is listening to you and I get messages from all around the world, Amsterdam, China etc.,” she said with a spark of excitement in her eyes.

“Being a radio presenter is a whole new experience. It’s your show and its magic and one amazing part is that I control the show and I don’t get to do that on TV because [with] TV, someone directs…even the pitch of my voice. Most of my friends normally ask: ‘How different is TV from Radio?’ and I tell them Radio is amazing, it’s all up to you and a great feeling,” she added.

Naa is trusted with the station’s flagship mid-morning show which is structured and produced to relax people so they can be at their most productive at work. And she is by all indications, excelling at it as she has won for herself hundreds of eager and committed listeners.

And her listeners trust her to sway them in whatever direction she sees fit each day when she gets behind the console. Asked what her ‘magic technique’ was, Ghana’s newest compelling radio mid-morning voice said three things: God; her team of producers and DJ; and her determination to keep her listeners “entertained, inspired and focused” as they go through the first half of the working day.

“My Producer, Catherine is just perfect, she is multi-talented; she runs the show, getting guests, calls, asking the right questions, topics and all. She is all you can get in a great producer,” said Naa about the head of her production team Catherine Sakyi.

The 27-year-old princess of the airwaves always starts off with Pharell Williams’ Happy track, a song which according to her “has a magical effect on a listener who isn’t happy” and “makes me dance. Gets me in the right mood and frame of mind” to start the show.

But apart from Pharell’s upbeat tune, Naa is much in love with her closest “super-duper DJ Mono!” “I told my DJ that the day he would call in sick, I would call in sick too,” she said as she tried to describe the strong bond between the two of them.

“Mono has been of great help to me: before I started Radio, I had this perception about DJs playing for parties, party songs and no cool music at all but since I started radio, I realised it’s not just that. MONO is super, he is a great person, he takes me through all the playlist and there is not a single day that I have never enjoyed any of his songs. You should get a DJ who really knows music, he has been a great support to me throughout the show.”

Naa Ashokor Adodoaji is aware she is operating in a competitive space but is focused enough not to allow the strain of competition to drain her positive energy and outlook.

“I think the only thing that keeps me going and doing well in my opinion is the fact that I don’t really think about my competition. I just try to do me, and grow me and be the best that I can be. I don’t really have time to think too much about what other people are doing among other things because I don’t listen to them at all. Because I’m on air at the same time. So they are not on my mind at all”.

According to her, her utmost priority is improving on what she has already built. “I just focus on growing the show, and growing me on the show. And being the best that I can be. And that’s what I do. So the competition is not so much on mind.”

Photos: Obama visits Bob Marley Museum in Jamaica: “I still have all the albums”