My Campaign For NDC Still Affects Me – Mr. Beautiful 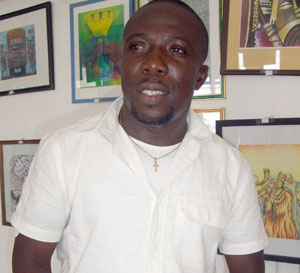 One of Ghana’s celebrated actors, Mr. Beautiful says several movie producers especially the Kumai-based ones have decided not to feature him in their movies because he campaigned for the National Democratic Congress (NDC) during the 2012 presidential elections.

The star actor, known in private life as Clement Bonney, says the fact that he mounted the party’s campaign platforms to endorse the candidature of John Mahama has made Kumasi based movie producers treat him as an outcast.

Ever since he made that move, Mr. Beautiful said he has not had a single role to play in any of the local movies, especially those produced in the Twi language.

In an interview with “News-One”, an obviously distraught Mr. Beautiful, as he is popularly known and called by most Ghanaians, expressed serious reservations about the fact that producers in the local movie industry, especially those in the Ashanti region have decided not to feature him in any of their movies. This, he said was because they tagged him as a member of the NDC for which reason they don’t want to give him roles to play. Ashanti region is the stronghold of the opposition New Patriotic Party (NPP). “They are not calling because they say the movies are bought in Kumasi, Koforidua and Sunyani so when they feature me in their movies and they take it to the market, the people say I’m NDC so they won’t buy and that is why they are not calling me”, he narrated.

According to him, “a movie producer called Paul Gee called me personally and told me that this is what is going on and it is true… I don’t remember the last time I even shot a movie in Kumasi.”

Concern
Me per say I don’t have any problem because the risk I took was very risky, part of which is the fact that nobody calls me to feature in their movies because they say I am an NDC”, he said, whiles asking rhetorically” why is it that those who did a similar thing for the NPP and Akufo Addo then were not told something like this; because they hate the NDC.”

He went ahead to ask “when Lumba and lots of musicians including Kwabena Kwabena, Ampong, Wutah declared their stands for Nana Addo four years ago, nobody said anything bad about it, but if you are a musician or an actor and an NDC, you become an enemy to Kumasi people and Ashantes. Why should it be like that?”
For now, Mr. Beautiful says he was managing the few roles that he had been handed by some movie producers in Accra to survive, hoping to launch a movie in the next couple of weeks.

In all these, he expressed extreme gratitude to President Mahama for the support he has been extending to him since according to him, he (Mahama) appreciates the risk he (Mr. Beautiful) took in declaring an open support for his candidature and for which reason he goes to him as and when need be for assistance.

WATCH: Drake Accepts The Artist of the Decade Award With His Son…