MUST READ: Can Okyeame Kwame shine again with The Versatile Show? 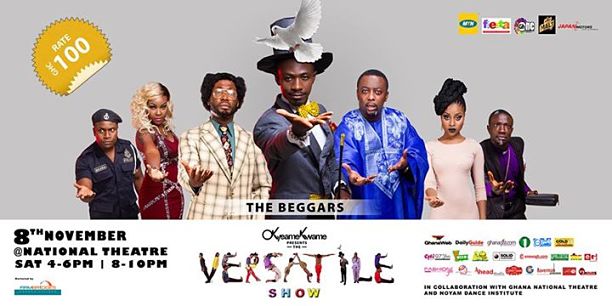 The music industry in Ghana is a tough one. It has seen many phases. Over the years, these phases have helped the Ghanaian musician positively and at the same time, it has grossly affected others negatively.

Many a time, musicians are not able to stand the growing changes in the industry, hence gradually go silent and subsequently fade out. From my perspective as a pundit, there are three kinds of musicians on this earth.

The first are the musicians who go missing or silent when there is change in the music scene. The second are those who change to meet whatever the new phase brings to the industry. These musicians don’t necessarily excel.

And of course, the last are musicians who by virtue of their ingenuity stay relevant no matter the phase the music industry goes through at any particular time. The third kind of musicians are the ones worth their salt.

One artiste who falls into this category and readily comes to mind is Kwame Nsiah Apau, known musically as Okyeame Kwame. He remains Mr Versatile because he has been able to stay and remain relevant through all the changing phases the industry has witnessed.

Truth be told, the Ghana music industry is not a smooth field. The industry is such that, no artiste stays on top of the game forever. So for an artiste to do music for almost 20 years and still remain relevant, is no mean achievement.

One has to have stamina. In fact, a lot of it is required to stay relevant, especially if you are someone like Okyeame Kwame who had seen all the various phases and still going strong.

Okyeame Kwame defines stamina. He has lots of it. Yes, he does because he started with his former rap partner, Quophi Okyeame, and he is now a solo artiste. There were people who started with him and one may ask, where are all those musicians? They have gone missing, because they do not have the kind of stamina Okyeame Kwame has to stay relevant.

Aside occasionally releasing hits, Okyeame Kwame is staying relevant with his numerous humanitarian projects and recently, the launch of his Versatile Show.

The first edition of the Versatile Show which seeks to combine music, dance and theatre took place on Friday, December 14, 2012 and it was adjudged as the best show in the year by industry pundits.

Some views expressed after the show included those of the former First Lady of Ghana, Nana Konadu Agyemang Rawlings, saying “I expect nothing less than good”. According to Earl Ankrah of GTV Breakfast Show, “OK has snapped his umbilical cord and become a parent of a yet to be labeled genre in the art.”

“The show was amazing. It was beautiful. It was more than I expected and I think it was well organised as well. You can really tell that, a lot of rehearsals went into this event.

“ I quite remember when I was coming; I had lot of the press guys asking me what I will be expecting from the show and I said to them that listen, for a man to actually title himself Mr Versatile, then he knows what he was talking about.

“ He acted on stage, he sang, he rapped, what  didn’t he do? He danced. He did almost everything; he played different roles on stage today and I think that Okyeame Kwame’s status has just been lifted up again” was what Amanda Jissih, host of E-Talk on GhOne Television, said.

For Lawrence Nana Asiamah Hanson aka Bulldog, he “thinks the only person who will come  close to doing a show like this or has done a show a little bit better than this is Michael Jackson.”

“I would like to say kudos to my best friend, Okyeame Kwame. He’s really impressed me. You see, I know Okyeame Kwame to be just a musician but for him to really think of bringing theatre, dance and then music together in a theatrical form, chale, come on, this is crazy good, I was really entertained to be frank with you” – Benjamin Kwadey

“I think this show was impeccably fantastic. I think Okyeame Kwame got the right caption for this show because he knew what he is made of and he came out as a very versatile artiste and we are proud of him. I think most of these artistes tonight, I mean those who have the opportunity to be here will learn from this example that, Okyeame Kwame has exhibited here tonight at the National Theatre” – Yaw Sakyi.

Two years on, he’s back with the second edition of the show at the National Theatre on November 8.

This year’s Versatile Show is a satirical play about the society. It dramatises how the African society is over dependent on the West for everything. But still turns around to disrespect common beggars for practising the trade on the streets.

It also depicts how members of our society are busily stealing from each other and pretending to be decent and honourable.

I ask: “can he shine again with all this pressure mounting on his neck?”

Photos from the 4Syte TV MVA Nominations Jam in Kumasi

A Plus Vs Maurice Ampaw; Case to be heard in Chambers on Nov 14