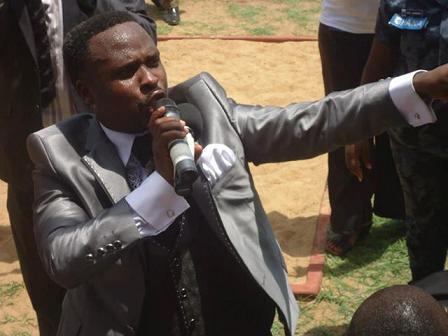 Many a times, movie producers from the Garden City of Kumasi have had to battle with prominent people in the Ghanaian society or the general populace either for the choice of titles for their movies or relations to events that might have unfolded but none of these will not get to them as Samuel Ofori, Director and producer of a new movie MOGPA Nyame that nearly surfaced unto the Ghanaian market is under immense pressure to change the title of the movie or face the wrath of Reverend O.B, founder and leader of one of the biggest religious movements in Ghana at the moment MOGPA.

Reverend Osei Bonsu who disclosed his displeasure at the movie title on Kumasi based Kessben fm believed the producer and director of the movie intends making money out of a brand he has created and as a result wish the name be withdrawn  immediately. MOGPA, an abbreviation for Moment of Glory Prayer Army has over the few years gathered a huge following and almost filled the Baba Yara Sports stadium at their last gathering.

In an interview with www.nydjlive.com, Samuel Ofori, producer of the movie MOGPA Nyame, he disclosed the movie had no evil against the leader of the religious group but rather to praise him as the concept came as a result of a testimony given by one member of the non denominational body during a recent encounter.

Reverend Osei Bonsu has however denied to make any further comments on the movie until the title is changed although the producer is bent of releasing the movie anytime soon.

Stay tuned as we find more details for you.