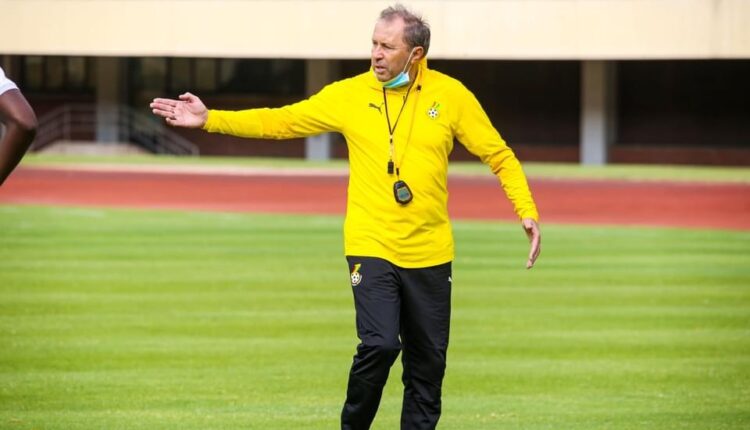 Coach Milovan Rajevac has been sacked as Ghana coach following the Black Stars disastrous showing at the ongoing Africa Cup of Nations.

It comes barely a week after Ghana suffered a humiliating group-stage exit at the 2021 Africa Cup of Nations after the four-time champions were beaten 3-2 by debutants Comoros.

The GFA is expected to issue a statement soon on the development.

Kojo Addae-Mensah, the sports analyst has said Black Stars coach Milovan Rajevac has failed to live up to expectations following a humiliating group-stage exit in the 2021 Africa Cup of Nations in Cameroon on Tuesday (18 January).

Debutants Comoros beat the four-time champions by a 3-2 scoreline to record their maiden victory in the continental showpiece.

Speaking to Kwaku Nhyira-Addo on The Asaase Breakfast Show Wednesday (19 January), Addae-Mensah said the coach and the entire technical team must be sacked.

“He (Milovan Rajevac) should go, and not only him, but the entire technical team should also go. He has no business even sitting on the bench playing the World Cup qualifier.

“And the arrogance with which Benedict Owusu [Asaase Radio’s correspondent at the tournament] is telling us he answered those questions at the press conference I am sorry to say Nhyira-Addo on your show, it pisses me off big time. He has absolutely no business being on the bench for the World Cup qualifier.”

Addae-Mensah added: “He should go, we might as well play without a coach, and just allow the boys to play and enjoy themselves. I mean if I was in charge, I will just say ‘hey guys go, have fun and play, enjoy yourselves, play whatever you want to play and let’s come home and we will go to this World Cup and meet some team and get more humiliated’.”

Rajevac in a post-match interview said he will not resign despite the defeat. He said his focus is the World Cup so he will stay on despite the heartbreak.

“I will not resign, because I came to take this team to the World Cup,” the Serbian said after the game.

“We didn’t start the game against Comoros how we wanted and we conceded an early goal. It was a poor start for us and then the red card to Andre Ayew changed everything. I think Comoros deserved this win because they played very well than us.”

Ghana needed a win over the Islanders and hope for a next round stage of the ongoing Africa Cup of Nations tournament but succumbed to Comoros.

Ghana suffered a humiliating group-stage exit at the 2021 Africa Cup of Nations after the four-time champions were beaten 3-2 by debutants Comoros.

El Fardou Ben Nabouhane put the islanders ahead early on, and Ghana then went down to 10 men when Andre Ayew was shown a straight red card.

Ahmed Mogni doubled the lead before the Black Stars fought back to make it 2-2. However, Mogni tapped in his second in the 85th minute to inflict Ghana’s first group-stage exit since 2006.

The result will go down as one of the biggest shocks in Nations Cup history as Comoros scored at the finals for the first time and then went on to record their maiden victory.

Incredibly, the side ranked 132nd in the world now have a chance to reach the knockout stages as one of four best-ranked third-placed sides.