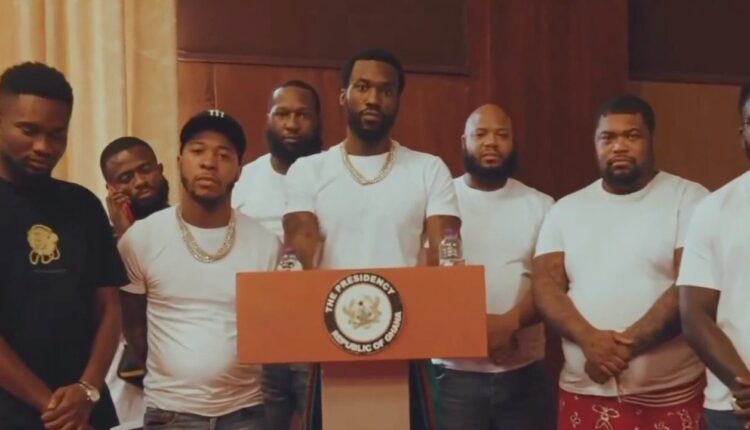 American rap artist Meek Mill has pulled down a music video shot at the Jubilee House in Ghana.

This comes after the rapper suffered severe criticism on social media for flying a drone and filming at the Jubilee House, a place highly regarded as a security zone, a presidential palace in Accra that serves as a residence and office to the President of Ghana.

It turns out that portions of the video were shot in and around the Jubilee House during his visit.

Meek Mill is sighted in different places at the presidency, from the frontage, through the main corridors, in the main conference hall — at a point positioned behind the presidential lectern – and later in a sitting area rapping.

On Sunday, January 8, 2023, Meek Mill incurred the wrath of Ghanaians when he shared the 46 seconds clip on Instagram with the caption “NOT INDUSTRY POWERED” we make the narrative GHANAAAAAAA🇬🇭🇬🇭🇬🇭 I felt like a king there!! “All real footage” “power rap”@nick_papz @fridayy at the “presidential villa” Although the video has since been deleted by the rapper, one question that remains on the lips of many Ghanaians is, “Who sanctioned the filming at the venue?”

Below is a copy of the video which has since been deleted.

Meek Mill recently visited Ghana where he performed at AfroNation. His visit to Ghana was not without drama.

A rough riding power bike session, claims of his phone having been pickpocketed at an event, fighting off hoodlums before getting on stage to perform and meeting with the president at Jubilee House, were some major highlights of his time in Accra.