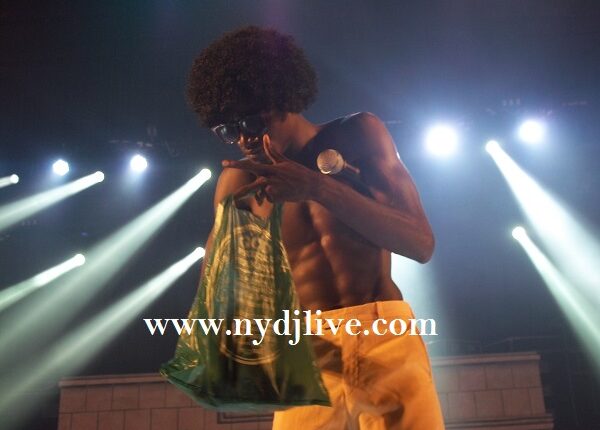 Popular Ghanaian comedian Kwadjo Nkansah Lilwin last night at the much talked about musical concert Ghana meets Naija held at the Accra International Conference Centre (AICC) pulled a stage act similar that of Chris Brown as he pulled out a green substance from his polythene bag which he pronounced as ‘weed’.

In the course of advertising his own product (weed), he stated the drug could make people go mad but DJ Black who seemed unenthused about his act called for his attention with a sig tune which Lilwin mistook for an applause causing him (Lilwin) to insult DJ Black (Asoaaa, his usual satire), he however continued until his microphone was muted.

At this point Lilwin had to end his act abruptly and leave the stage amidst cheers from the crowd who attended the sold out concert.

MTN Ghana later issued a three (3) point apology on the projected screens disassociating itself from the sale of the drug. The text read;

MC Chris Attoh also later apologized for the act pulled by Lilwin on the night. It is yet to be established if the act by MTN Ghana’s ambassador will attract any punishment.

Kim Kardashian, Kanye West wedding: Guests touch down in Italy ahead of nuptials