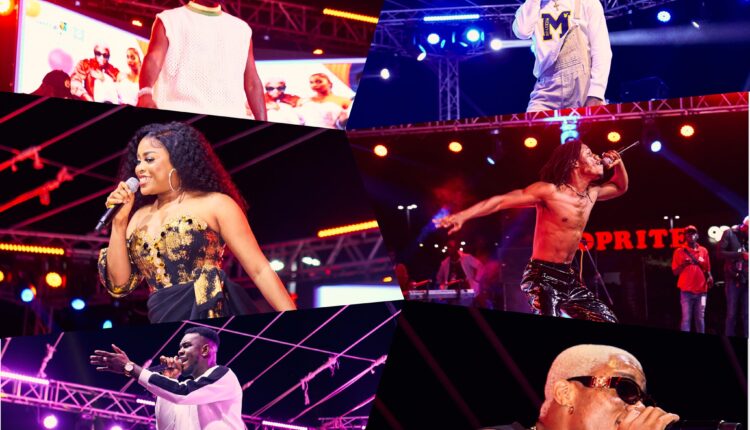 After weeks of anticipation, the much-talked-about Lynx At 15 Experience Concert came off at the West Hills Mall on Saturday, July 30.

On hand were DJ Vyrusky, DJ Wallpaper, DJ Shiwaawa and DJ Cartoon who provided great music rotation throughout the event.

The night saw up-and-coming artists from Kasoa and all over the capital city also give off their best as curtain-raisers.

Kwame Yogot, Malcolm Nuna, Lil Win, and Mr Drew were on stage to support and didn’t disappoint with their performances.

Adina took over and performed some of her great tunes including ‘Why’, ‘Killing Me Softly’, ‘Hallelujah’ and ‘Too Late’.

The Rockstar lived up to his name. Kuami Eugene’s energetic live band delivery of every song got the crowd reacting with cheers. From ‘Obiaato’ to the last song; ‘Abodie’, there was no dulling at the concert.

Ghana’s Golden Boy, KiDi, wrapped the excitement up with back-to-back bangers with the band. He ‘Blessed’ the crowd to ‘Say Cheese’, gave them ‘Enjoyment’ without forgetting to ‘Touch It’.

The Lynx At15 Experience Concert was put together by Lynx Entertainment and West Hills Mall with sponsorship from itel Mobile, Tigmoo, and SkyNet, powered by Fidelity Bank & TicTok and Joy Entertainment as media partners.