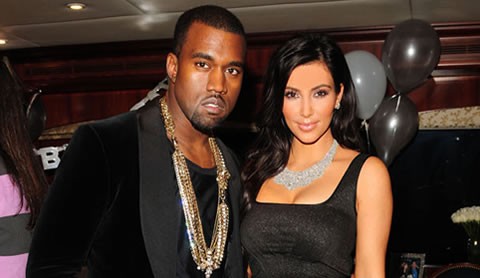 Sources close to the couple confirmed the decision, which comes five days after Kim welcomed her first child at a hospital in Los Angeles.

The revelation ends the intense speculation over the child’s name, with other rumoured options said to include Kaidence Donda, in honour of Kanye’s late mother.

And a source told UsWeekly that the couple have already given their daughter a nickname – she will be ‘Nori for short’.

They added that the child has no middle name.

TMZ witnessed a signed birth certificate with the name North West signed by Kim, 32, and Kanye, 36, at Cedars-Sinai hospital.

People magazine confirmed the news with a source close to the Kardashian family.

The name North had previously been suggested as a possibility for the child, although many Kardashian fans had dismissed the idea as a joke.

And the revelation certainly proved fruitful amongst Twitter users, as North West began trending within minutes.

It also sparked a slew of jokes from would-be comedians amused by the choice.

Back in March, Kim denied rumours that Kanye wanted to name the baby North.

‘I do like Easton, Easton West,’ she joked on The Tonight Show with Jay Leno at the time.

Indeed prior to the baby’s birth on Saturday it had been expected that the pair would continue the ‘K’ theme that runs in Kim’s family – which is something that Kim has spoken about in the past.

While North was to prove her final choice, Kim was said to be very keen on Kaidence, to match her family’s fondness of the letter ‘K’.

The reality star was reported to like the idea of calling the baby Kai for short.

And further report claimed the middle name would be Donda, in honour of Kanye’s late mother, who died in 2007 due to complications from cosmetic surgery.

Meanwhile Kim’s close friend Larsa Pippen recently revealed that she had been to visit the baby in the hospital and a decision was nearly made.

But she said Kim didn’t welcome her suggestions.

‘We kind of went back and forth and the name that I wanted, [Kim] didn’t love,’ she said.

While fans had been desperate to know the name of the baby, the child’s step uncle Brody Jenner revealed on Thursday that he didn’t want to know.

‘It’s so new, so I’m going to give her some time and then as soon as she’s ready, I’ll come see her,’ he told Ryan Seacrest.

Kim gave birth to her first child Saturday 15 June – a month ahead of her due date.

Mail Online exclusively revealed that the reality star had been admitted to hospital in Beverly Hills the night before.

Kim had taken out a birthing suite at Cedars-Sinai Medical Center – a hospital of choice among many celebrities including Britney Spears, Victoria Beckham and Jessica Simpson.

Hours later – around 1:30 a.m. – she gave birth to her baby girl, now believed to be named North.

Her partner, rapper Kanye West, and mother Kris Jenner were reportedly at her side.

Kim’s due date was reportedly July 12 – just one day after Kate Middleton.

The date would also have been Kanye’s mother Donda West’s 64th birthday.

It’s A Boy!! Emelia Brobbey Delivers In The UK