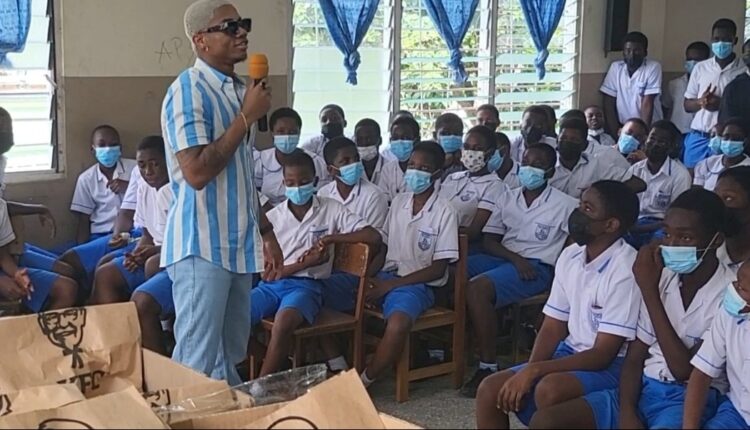 Singer KiDi is intensifying his ‘Be Kind‘ campaign and has been spotted at a school advising pupils.

Stepping up the campaign, the KFC brand ambassador together with representatives from the fast food restaurant visited Mary Mother of Good Counsel school at Airport-West, Accra on October 5.

KiDi advised the pupils to be tolerant of opposing views and always try to be kind to each other.

Pupils and teachers of the school received gifts from the singer and KFC.

The ‘Touch It’ hitmaker came under fierce criticism for unsavoury tweets he made years ago before becoming a star.

Though he had apologized in 2020 about the same old tweets, he apologized again when the conversation resurfaced.

For a long time, the singer has been using his powerful voice to preach anti-cyberbullying with an emphasis on the need to accommodate diverse opinions.

During his performance at the highly patronized Reeperbahn Festival in Germany, he told the crowd, “…you literally could be anybody you want to be behind your phones…I urge everybody to be kind. Be kind to each other”.

Black Sherif – The Villain I Never Was (Full Album)