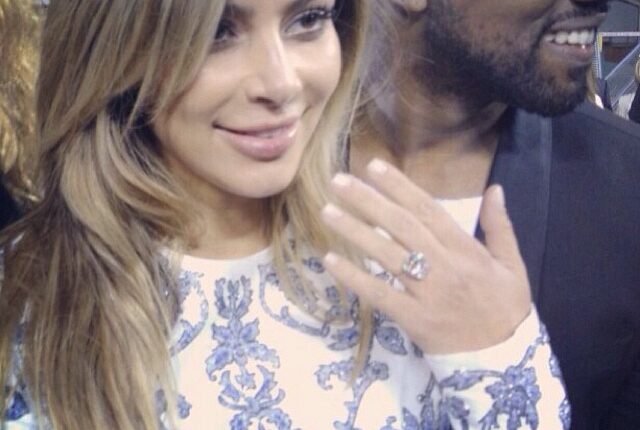 Share
Kim Kardashian and Kanye West are engaged, it’s been reported, after the rapper popped the question in a romantic proposal on the TV star’s 33rd birthday.

E! report that Kanye got down on one knee in front of Kim’s family and friends at AT&T Park in San Francisco last night. The rapper’s Yeezus Tour is due to continue in nearby San Jose tomorrow night.

Kanye doesn’t do low key, and according to the report he rented out the entire stadium for the big moment, where Kim’s family were all thought to be present as they celebrated her 33rd birthday.

No further details have been released, and neither Kim or Kanye have mentioned any engagement on Twitter but the fact the report comes from the network behind Kim’s family reality show, suggests it’s only a matter of time before the happy couple confirm they’re heading down the aisle.

The report has also been doing the rounds on Twitter with a fan site tweeting the below photo, supposedly just after the big moment.

According to HollywoodLife eyewitnesses were left stunned as the ‘Jesus Walks’ chart-topper gave fans a behind the scenes tour of his latest show, admitting he was head over heels for his megastar girlfriend declaring: “Isn’t my girl the most beautiful woman ever — no, I mean ever? One day she’s going to be my wife,” while the blushing bride-to-be grinned from ear to ear responding: “ Kaaaanye. You’re too much.”

Praising the rapper who has faced a backlash of negative press in recent months, sources told the site: “He was sweet, real comforting and outgoing. He had a lot of energy and you could tell he really loves Kim,” the insider revealed.

“He was showing some of the costumes he would be wearing during the rehearsals and had his arm around Kim the whole time, walking slowly and paying attention to her every step. He was very thorough with her.

“He didn’t know any of us but that didn’t stop him from sharing that intimate moment with Kim,” the onlooker adds. “You can tell his love for her is genuine and real.”