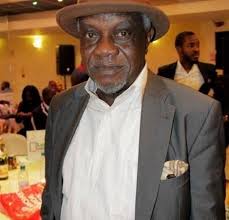 Taking the whole world by shock at the death of veteran Nigerian actor and father to musician Dr. Sid, Justus Esiri is finally to be laid to rest in his hometown, Abraka in Delta State, Nigeria on the 12th of  April 2013 according to a statement from the family.

The statement which was released on Sunday and signed by Mr. George Esiri, had lined up several activities to mark the final journey of the actor were in two phases.

The first phase will include service of songs on April 9 and a mass on April 10 at St. Jude Catholic Church, Mafoluku, Lagos, Nigeria.

The body of the actor will then be airlifted to Warri, Delta State and then Abraka for the final phase of the burial activities.

It shall then be followed by a second mass which will be held at the Polo Turf in Abraka on April 12 where the remains of Justus Esiri will be laid in state before his interment the same day.

Justus Esiri, died on February 19, 2013, following a complication from diabetes.

He was an Officer of the Order of the Niger (OON) and the Otun Amuludun of the Source in Ile-Ife Osun State.