Jennifer Hudson Gets Star on the Walk of Fame 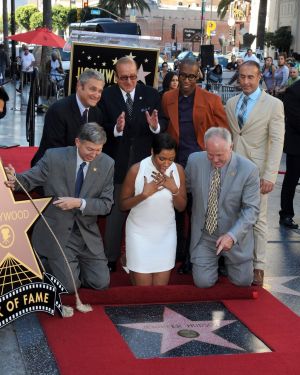 The term “whirlwind” best describes Jennifer Hudson’s post-American Idol career. Hudson has earned a Grammy and Oscar since she was voted off the singing competition in 2004, and can now add a star on the Hollywood Walk of Fame to her registry of accomplishments.

The 32-year-old Chicago native was honored with the star on L.A.’s famed Hollywood Blvd. Wednesday (Nov. 13) for her work in music. Hudson’s fiancé, David Otunga Sr., and the couple’s young son joined her to commemorate the achievement.

Record executive Clive Davis was also on hand to share a few words about the entertainer, who nabbed the aformentioned Academy Award for her Dreamgirls acting debut. “I didn’t sign her to a recording contract at the very beginning,” Davis admitted. “But when I saw her, I saw her screen test for Dreamgirls, I knew that she was truly a unique, original artist whose career would be nothing short of spectacular, so I did sign her.”

Davis said he realized then that her voice in particular was something to be remembered. “I had been privileged over the years to work with two of the greatest voices of all time: Aretha Franklin and Whitney Houston, I never thought I’d hear another voice to compare, and yet staring me in the face was a new voice that did compare. It literally sent shivers up my spine.”

An emotional Hudson held back tears as she took the podium, making mention of her mother Darnell Donnerson, who was murdered alongside her brother and nephew four years ago. Hudson’s ex-brother-in-law William Balford was later found guilty of killing her family members. “I knew I would get emotional and I’m sure my mom is in heaven like, ‘Jenny stop crying,’ but now’s the time to cry, mama,” she said smiling and looking toward the sky. “This is an amazing honor as we all know and I did not see this coming. I’m so honored to be here with so many that I love and I feel as though we’re all a family.”

After the ceremony, Hudson Instagrammed a picture from the event with the caption, “Just got my star on the #WalkOfFame!! Such an honor.”

Aside from the Walk of Fame star, Hudson has more career feats to be excited about in the near future, including the holiday musical Black Nativity, which opens Nov. 27, and her third studio album due out next year.

VIDEO: Fuse ODG Talks to the BBC on Improving Africa’s Image Through Azonto