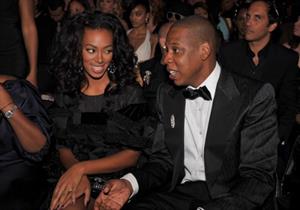 Wow, I guess a lot can change in the course of a week. Yesterday the internet was ablaze with the epic Carter and Knowles family drama, when footage of a shocking altercation between Jay and Bey’s little sister Solo, leaked to public showing Solo violently attacking Jay in the elevator of the Standard Hotel in NYC after MET Gala after party.

Well according to reports, Jay-Z and sister-in-law Solange were out in enjoying the beautiful weather in NYC, and jewelry shopping?? TMZ reported earlier today that the pair were sighted in high-end jewelry store, Mr. Flawless in NYC seemingly unbothered and unfazed by the events that took place in the Standard Hotel elevator. All well that ends well for the Carter clan, or is this a contrived PR ploy to present a united front to the public? Inquiring minds want to know. Especially since Solo did remove all pics of her big sis from her IG posts.

If anything, we earnestly hope the power couple and family are able to move past this very private family matter that has made its way to the public eye.

You think Jay and Solange were able to kiss and make up, and move past their differences after Solo two pieced Jay? Tell us your thoughts.

Not in Ghana!! BBC sacks DJ for playing a song with “N” word