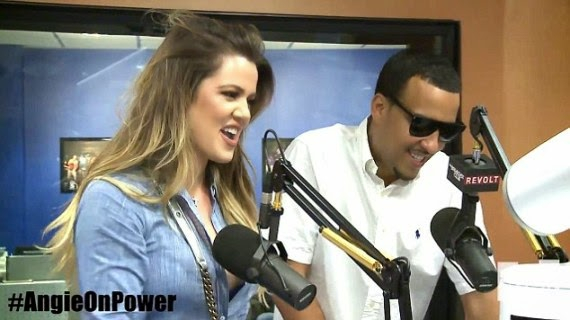 Reality show star, Khloe Kardashian has disclosed that she and her boyfriend, rapper, French Montana have put sex on hold due to the Ramadan.

The lovebirds have been inseparable since they began dating early this year but many have called their relationship to question with some doubting if it will last.

To prove their critics wrong, the pair are now seen together at events and they were recently together for an interview on New York-based Power 105.1 FM on Thursday.

French Montana, born Karim Kharbouch, told show host Angie Martinez that among other things that he observing Ramadan as a result, he was staying away from alcohol.

Khloe Kardashian, sister of Kim Kardashian, revealed that her sweetheart is also taking a break from sex because of the Islamic month of fasting.

“There’s no sex” during Ramadan, she said and jokingly added that, “That’s so fun.”

Khloe also used the interview to jab critics of her relationship with the rapper saying she has learnt from her past when it comes to relationships.

The reality show star added that: “People are going to comment no matter what. If I dated the most clean cut perfect guy they’re going to comment. That’s just the way it is. So if I’m having fun and if I like this kid no one else should care.

“Me and Kris Jenner are best friends. We drink together,” he said.