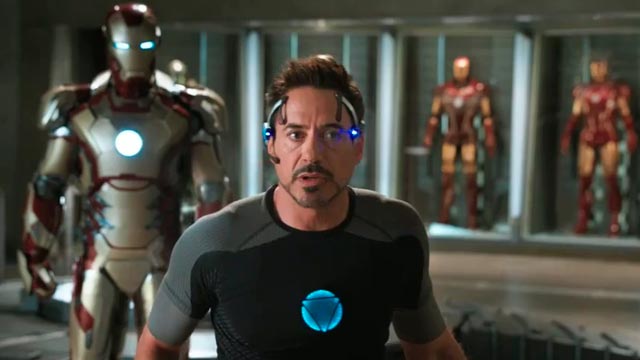 Before convincing reluctant Marvel executives that he was the man to put on the metal suit, Downey still was trying to live down drug addiction and jail time in his 20s and 30s that nearly ruined his career.

The success of “Iron Man” led to another blockbuster franchise in “Sherlock Holmes,” and Downey’s professional choices now look limitless.

In an interview before the release of “Iron Man 3,” Downey said that “Avengers” director Joss Whedon had been editing a first cut of that film and told him the movie didn’t really start until Stark and girlfriend Pepper Potts (Gwyneth Paltrow) appeared together on screen.

Downey said that was a testament to the groundwork laid years earlier in “Iron Man,”. “When we were shooting it, this kind of became the heart of several franchises.”

“So you know we’re having a nice time,” Downey said, sidestepping comment on whether he might return for more “Iron Man” and “Avengers” sequels.

“Iron Man 3” did four times the domestic business of every other movie out there; the combined total of all other releases was $43.7 million, according to Hollywood.com.

While it was a huge weekend for Marvel and Disney, the overall industry continued to slump, thanks to the record start for “The Avengers” over the same weekend a year ago. Domestic revenues this weekend totaled $219 million, down 15 percent from the $258.1 million during that “Avengers” weekend last year.

Hollywood’s domestic revenue this year is at $3.14 billion, off 11 percent from 2012’s pace, according to Hollywood.com.

Estimated ticket sales for Friday through Sunday at U.S. and Canadian theaters, according to Hollywood.com. Where available, latest international numbers are also included. Final domestic figures will be released Monday.