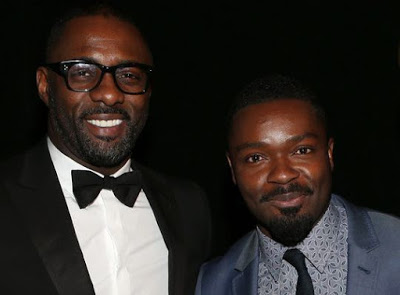 Idris Elba and David Oyelowo couldn’t be prouder of their career achievements. Both of them were among Hollywood actors on Queen Elizabeth II’s annual New Year’s honors list and recognized with Order of the British Empire titles for their services on the big screen.

“Awards and honours come in all shapes and sizes and all as significant as the other. But this is beyond special as it comes from Queen and country, and I couldn’t be more proud for receiving this right now,” Idris said of the titles in a statement, before adding, ” What a year. On me head son!’

The past several months have been excellent to Idris. He earned the order of chivalry of British constitutional monarchy after receiving three SAG nominations just a few weeks ago. He was also announced to receive two Golden Globe nominations.

On the other hand, “Selma” actor David also expressed similar excitement. The title from the monarch was special for David as he began his acting career after receiving a grant from Prince Charles’ charity, the Prince’s Trust, at the age of 18. “To be honored by the Queen in this way having been aided by her son’s charity feels like a beautiful full-circle moment,” the 39-year-old actor said in a statement.

The Queen honors British citizens twice a year, around the New Year and on her birthday. The order of chivalry is given to those who make contributions to the arts and sciences, work with charitable and welfare organizations and public service outside the Civil Service.