I Took The Bracelet But Forgot To Pay – Emelia Brobbey 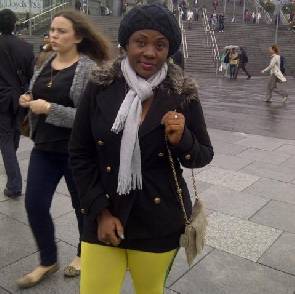 Well, I knew this would come up immediately she allowed spoke persons to speak on behalf instead of stating the facts clearly herself.

Found this article from News-One which I felt I could share. Read.

Actress Emelia Brobbey, alleged to have shoplifted in a UK shop, and her spokespersons are giving contradictory explanations of what happened.

The actress arrived in Accra last Thursday evening and told journalists at the airport that she deliberately took the bracelet she was alleged to have stolen but did not find it when she got to the counter and therefore did not pay for it until the anti-theft alarm exposed her.

But one of her god-fathers in the movie industry, Kwesi Nyamekye of Miracle Films, stated on Peace FM’s Entertaintent Review last Thursday afternoon that the actress had absolutely no idea how the said bracelet got into her custody.

Mr. Nyamekye inferred that Emelia’s baby stroller may have grabbed the bracelet without the knowledge of the actress. Her baby may have playfully taken the bracelet.

Whatever the case may be, Emelia admitted that indeed UK police officers visited her home over the matter and that they took her statements for their records.

But last Thursday Mr. Nyamekye said he could even put his life on the line over the matter because he has worked with Emelia for over 10 years and she is not the type that would steal a bracelet.

Explaining further why the Police followed up to her house, Mr. Nyamekye gave two reasons. He said once the alarm went off it meant something unusual had happened and it automatically alerted the security system in that neighbourhood. Therefore there was the need for the police to follow up and ask her a few questions as a matter of procedure.

He explained that this was due process and that the Police even visited her home three clear days after the incident at the shop.

The second reason he gave was that Emelia actually paid for her goods with cash and she was found to be carrying a huge amount of cash in a community where people mostly used credit cards for trading. He said this sounded unusual and pricked the curiosity of the police; therefore they decided to visit her home for clarification.