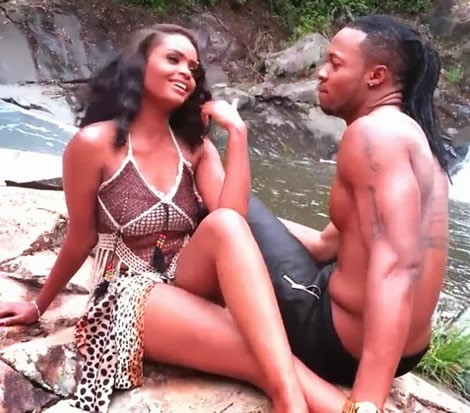 Popular act, Chinedu Izuchukwu Okoli, widely known as Flavour Nabania, has had his own share of many controversial stories of him being in a relationship with BBA winner Dillish who he used for his latest music video. Few weeks back reports went viral that Dillish has dumped her long time lover for Flavour, which has left tongues wagging.

According to reports online, BBA 2013 winner, Dillish appeared in Flavour’s Ikworikwo video last year but that was strictly professional. Flavour even paid for her appearance. Then they became friends. It was alleged that after she broke up with her boyfriend, she came for a movie in Port Harcourt. Afterwards, she came to Lagos, on a visit and had dinner with Flavour. Then she spent the night in his house at Chevron Estate, Lekki, Lagos, which he bought in November 2013. Thus, a secret affair emanated. Few days ago, a picture of both alleged lovers surfaced online which fuelled the rumour of their sexcapades.

The music artiste has finally out to debunk the widespread reports that he was having an amorous affair with BBA 2013 winner, Dillish. The Adanma crooner also debunked the insinuation that suggestive pictures in circulation was taken after their sexcapades in his Lekki, Lagos apartment.

In a chat with Encomium Weekly, the Glo ambassador, through his right hand man, Onucheyo Nasir a.k.a Nash said it’s just a professional picture and that there is no affair between them for now.

“For now there is nothing between us. She featured in my video and I went to pick her at the airport and also hosted her. That’s it. I wonder why they are spreading the falsehood all over the net. We are not kids and if there is something between us why hide it? It’s strictly professional for now.”