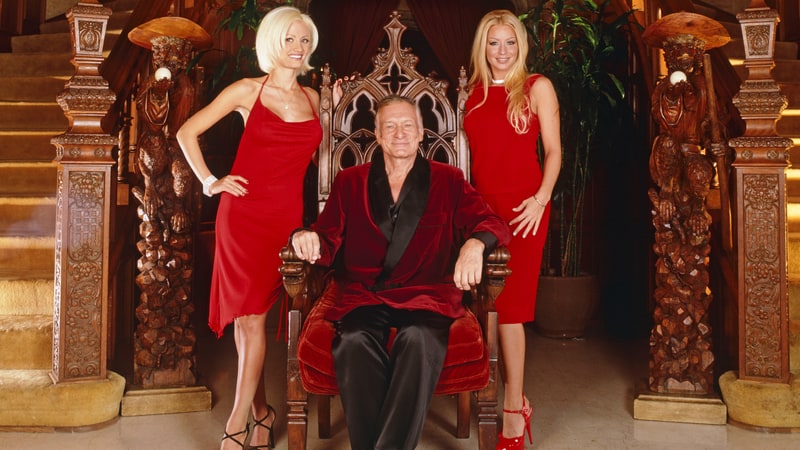 Hugh Hefner — the silk-robed Casanova whose Playboy men’s magazine popularized the term “centerfold,” glamorized an urbane bachelor lifestyle and helped spur the sexual revolution of the 1960s — has died, the magazine said late Wednesday. He was 91.

“My father lived an exceptional and impactful life as a media and cultural pioneer and a leading voice behind some of the most significant social and cultural movements of our time in advocating free speech, civil rights and sexual freedom,” Cooper Hefner, Playboy Enterprises’ chief creative officer and Hugh’s son, said in the statement.

“He defined a lifestyle and ethos that lie at the heart of the Playboy brand, one of the most recognizable and enduring in history.”

The leading men’s magazine of its age, Playboy helped bring explicit photography, embodied by its famous nude centerfolds, into the mainstream. Its iconic logo – a bunny sporting a bow tie – would eventually be emblazoned on nightclubs, a record company and TV series. And with his trademark smoking jackets and pipes – and the silk pajamas he would often wear to work – Hefner became the embodiment of a sexually adventurous yet urbane image and lifestyle, a seeming role model for generations of men.

Hefner wouldn’t have been the first person anyone would have expected to launch such an empire. Born in Chicago on April 9th, 1926, he was the son of Methodists, served as a noncombatant in World War II, earned a bachelor’s degree in psychology at the University of Illinois and didn’t lose his virginity until he was 22.

His career, however, was foreshadowed by two events: In high school he published his own comic, “School Daze,” and after college, he studied the sex-research work of Alfred Kinsey, the scientist who published the controversial book, Sexual Behavior in the Human Male. “I was raised in a truly typical Midwestern home with a lot of repression,” Hefner said later. “My life, and the creation of Playboy, were a response to that repression. I tried to make some difference, and I think I managed to do that.”

In the early 1950s, Hefner officially entered the publishing world with a job as copywriter at Esquire, then based in Chicago. When the magazine declined to give him a raise, he opted to stay in town when Esquire moved to New York. Hefner sensed another destiny for himself, tied in with the post-war repression of the Fifties. “I looked back on the roaring Twenties, with its jazz, Great Gatsby and the pre-Code films as a party I had somehow managed to miss,” he later explained. “After World War II, I expected something similar, a return to the period after the first war. But when the skirt lengths went down instead of up, I knew we were in big trouble. It turned out to be a very conservative, serious period – socially, sexually and politically.”

Raising $8,000 – including $1,000 from his mother – Hefner published the first issue of Playboy, originally called Stag Party, in late 1953. As Hefner wrote in his first editor’s note, his vision for Playboy was “mixing up cocktails and an hors d’oeuvre or two, putting a little mood music on the phonograph and inviting in a female for a quiet discussion on Picasso, Nietzsche, jazz, sex.” The cover featured Marilyn Monroe, who was even more prominently presented inside – in a nude centerfield taken several years before.

The issue sold an impressive 50,000 copies, and Hefner’s idea of tapping into the yearning for an alternative to Eisenhower-era blandness struck a chord. “I just thought there was another way of living a life,” he said. “Under all the conservatism and the repression there was this yearning for something different. That’s the reason the magazine was successful, why people embraced it from the very outset.”

In 1963, Hefner had his first major brush with infamy when he was sued for publishing nude photos of actress Jayne Mansfield. (The jury couldn’t reach a decision and Hefner was spared.) That same year, a young Gloria Steinem went undercover as a Playboy Bunny at one of his Playboy Clubs and wrote a stinging inside critique of the magazine’s ethos and chauvinism in an article, titled “A Bunny’s Tale,” which was published in Show magazine.

Over the following decades, the magazine published nude photos of its Playboy Bunnies along with shots of stars Pamela Anderson, Kate Moss, Madonna and Cindy Crawford. But Hefner envisioned Playboy as more than a nudie magazine. It was also home to a pantheon of prestigious writers, including John Steinbeck, Tennessee Williams, John Updike, Gore Vidal, Arthur C. Clarke, Philip Roth and David Mamet, among many others. The iconic “Playboy Interview” feature launched in 1962 with future Roots author Alex Haley interviewing Miles Davis (Hefner was a huge jazz aficionado and later founded the Playboy Jazz Festival) and would eventually feature many luminaries, setting the stage for the ongoing joke, “We really read Playboy for the articles.” During his own “Playboy Interview” in 1976, Jimmy Carter notoriously confessed that “committed adultery in my heart many times.” Hefner’s late-1960s talk-variety show, Playboy After Dark, hosted musical guests such as the Grateful Dead, James Brown, Linda Ronstadt and an early, pre-Buckingham-Nicks edition of Fleetwood Mac.

“Playboy was not a sex magazine, as far as I was concerned,” Hefner once said. “Sex was simply part of the total package. I was trying to bring sex into the fold of a healthy lifestyle.”

Of course, it was Playboy’s lush photography of naked women – and the free-wheeling sensibility he allowed his readers to revel in – that ultimately made Hefner and his magazine a massive, ground-breaking success. By the early Seventies, Playboy was selling seven million copies a month and Hefner’s globe-trotting lifestyle was abetted by his private jet, the Big Bunny, that contained a circular bed, an inside disco and a wet bar. In the Seventies, he moved into the Playboy Mansion West in Holmby Hills, California, home to seemingly ongoing parties. (He also owned a Playboy Mansion in Chicago.)

Hefner first married fellow student Mildred Williams in 1949 and the couple divorced 10 years later. In 1989, he wed Playmate Kimberley Conrad, a marriage that ended in 2010. In 2013, he married his younger girlfriend, Crystal Harris, with whom he was still wed at the time of his death. Yet he was unapologetic about his freewheeling lifestyle. Asked in 2013 how many women he’d slept with, he replied, “How could I possibly know? Over a thousand, I’m sure. There were chunks of my life when I was married, and when I was married I never cheated. But I made up for it when I wasn’t married. You have to keep your hand in.” For the most part, Hefner’s female companions all adhered to the same mold: twentysomething, bosomy and blonde. “Well, I guess I know what I like,” he once said when asked about his preferences.

Hefner and Playboy Enterprises, the magazine’s parent company, took a number of hits after its 1970s heyday. “When Penthouse and Hustler came along, they confused what I was trying to do,” Hefner once commented about his magazine rivals. Those competitors ate into Playboy’s business, and the magazine’s circulation eventually dropped to just over one million. Hefner himself had a stroke in 1985, possibly tied to the stress he felt after the murder of Playmate Dorothy Stratten and a book about her life by Peter Bogdanovich that harshly criticized Hefner.

Well into his 1980s, Hefner kept apace of the culture even as his grown children began running different parts of his empire. For several TV seasons starting in 2005, he was seen in the reality series The Girls Next Door, in which women competed to live in the Playboy Mansion. During the last few years of his life, Hefner and his business went through several seismic shifts: In August 2016, the mansion was sold for $100 million to a co-owner of Hostess (although Hefner was invited to continue to live there), and that same year, in a bid to go more legit, Playboy published its first non-nude cover (model Sarah McDaniel in a bikini).

In the fall of 2016, Hefner was the subject of rumors about his health. As per his wishes, he was to be buried in a crypt next to that of Marilyn Monroe, who’d unwittingly helped launch Playboy into the multi-million-dollar business it became.

For all the raunchiness of his product, Hefner remained an unusually complex figure. His Playboy Clubs were open to all races – unheard of at the time, the Sixties – and in 1964, he launched the Playboy Foundation to fight censorship. “No, I’ve never gotten enough credit,” he once said of those parts of his legacy. “But, as I’ve said many times, my life is like a Rorschach test. People project their own dreams, fantasies and prejudices onto my life. So people are either fans, or jealous or disagree. Everybody marches to a different drummer. If I hadn’t courted controversy, I wouldn’t be here today.”