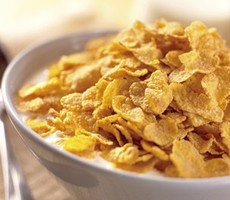 People should eat breakfast to keep their hearts in good condition, according to researchers in the US.

Their study of 27,000 men, in the journal Circulation, showed those skipping breakfast were at a greater risk of heart problems.

The team at the Harvard School of Public Health said missing the meal put an “extra strain” on the body.

The men, aged 45-82, were studied for 16 years. During that time there were more than 1,500 heart attacks or cases of fatal heart failure.

However, people who skipped breakfast were 27% more likely to have heart problems than those who started the day with a meal. The researchers adjusted for other lifestyle risk factors such as smoking and exercise.

Researcher, Dr Leah Cahill told the BBC: “The take-home message is eat in the morning when you wake up, preferably within an hour.

“The results show that something is better than nothing, but it’s always better to have something healthy and balanced.”

She said the timing of the meal seemed to be key and waiting until lunch rather than “breaking fast” may be straining the body over time.

She said this could be increasing the risk of high blood pressure, obesity and diabetes which could in turn damage the heart.

Victoria Taylor, a dietitian with the British Heart Foundation, said: “These researchers only looked at men aged over 45, so we would need to see further research to confirm that breakfast has the same impact on the heart health of other groups of people.

“What we do know is that a healthy and filling breakfast can make that mid-morning biscuit less tempting, as well as giving you another opportunity to widen the variety of foods in your diet.

“Wholegrain toast, or cereals like porridge with low fat milk are a good way to start the day. Try a sliced banana or dried fruit on top and you’ll be on your way to five-a-day before you’ve even left the house.”

Reason to Booze? 6 Reasons Beer Is Good For You