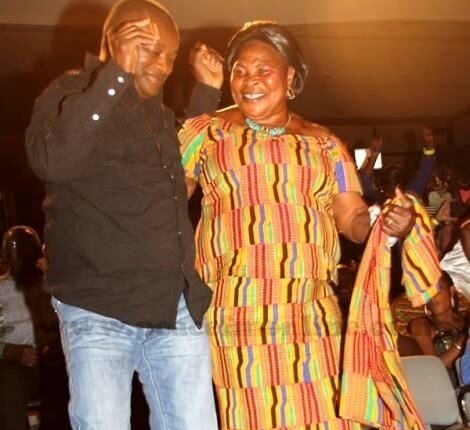 Advertising organized “Legends And Legacy Ball” is known for uniting political leaders aside main aim of the event to celebrate and honour great Ghanaian music living legends.  The maiden edition in 2011 brought together two living ex-presidents from two different rival political parties JJ Rawlings from NDC and NPP’s J.A Kufuor. Aside sitting side by side and shaking hands at the event, the former leaders took to the dance floor together.

This year’s edition which celebrated AB Crentsil saw yet another political unity on stage as the 2012 Presidential aspirant of the Peoples’ National Convention (PNC), Mr. Hassan Ayaria and leader and founder of the Ghana Freedom Party (GFP), Madam Akua Donkor took to the dance floor together and also went on stage individually to attempt their own rendition of two of AB Crentsil’s hit songs.

Akua Donkor who said her favorite AB Crentsil song is “Devil” (Anyen), tried her best to sing but could barely remember the words. Mr. Hassan Ayariga did sing “Juliana” but with the support of the backing vocalists who did all the work for him. He however did well to entertain the audience. Another politician who graced the occasion was Gentle Giant John Agyekum Kuffour who has been consistently present at all three editions of the even since its inception.

One memorable moment on the evening was when Actor Kofi Adjorlolo came as a surprise to sing the ever controversial “Moses”. Mr. Adjorlolo gave a great account of his versatility on stage as he memorized every single word of the complicated song. He also surprised the audience as he played the trumpet intermittently as part of his performance, attracting applause and laud cheer from the crowd.

Other performers on stage included Castro, Raquel, Koo Ntakara, Kwabena Kwabena, Efya, No Tribe and King Ayisoba. AB Crentsil mounted the stage to climax the night performing a number of his classics. He ended the night with a special performance of his controversial hit song “Moses”.

We are already wondering which politicians would mount the stage and what surprises organizers would bring to the event come same time next year.

US Rapper, Wale Shares Childhood Photos and Pix With His Father