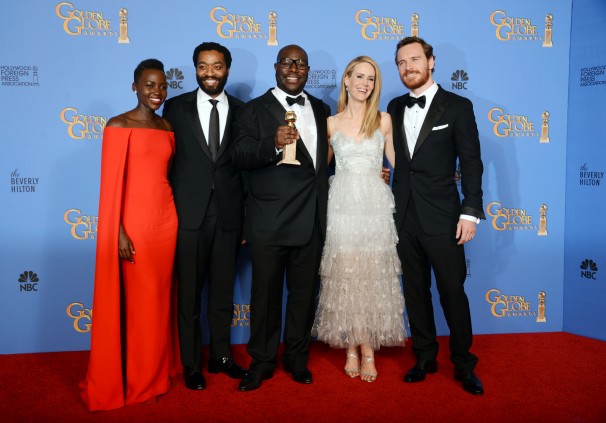 Slavery epic “12 Years a Slave” was crowned Best Drama at Sunday’s Golden Globes, while “American Hustle,” “Dallas Buyers Club” “Gravity” and “The Wolf of Wall Street” all took home awards in other major categories on a night when no single film dominated.

“Hustle” technically had the best showing with three wins, as David O. Russell’s larky caper took home the award for Best Comedy or Musical and stars Amy Adams and Jennifer Lawrence walked away with prizes in the lead and supporting actress categories, respectively. Adams won for her role as an accent-swapping con artist while Lawrence took home the evening’s first award for her work as a bitter, unintentionally funny housewife.

“Gravity’s” Alfonso Cuaron was crowned Best Director for his work on the outer space thriller; it was one of the evening’s most competitive categories, as he beat the likes of Russell, Steve McQueen (“12 Years a Slave”) and Spike Jonze (“Her”).

Jonze did have a moment in the spotlight, winning Best Screenplay for his futuristic love story. The visibly-ecstatic Jonze gave special notice to Scarlett Johansson, who voiced Joaquin Phoenix’s computer love interest, but wasn’t eligible for a nomination. In the Foreign Film category, Italy’s “The Great Beauty,” picked up the trophy, while Disney’s unstoppable box office hit “Frozen” was named Best Animated Film.

An unexpected show-stealer was Sean “P. Diddy” Combs, who helped announce Alex Ebert’s win for Original Movie Score for “All Is Lost,” and briefly crashed the musician’s speech: “He was on a boat with me partying in St. Bart’s. And now here we are together!” Combs exclaimed, marveling at the small world of really rich celebrities. U2 added to the A-list music stars on stage, winning Best Original Song for “Ordinary Love,” in Nelson Mandela movie “Mandela: Long Walk to Freedom.”

After receiving glowing reviews last year, co-hosts Poehler and Tina Fey kicked off their second stint hosting the Golden Globes because, as Fey said: “This is Hollywood. And if something kind of works, they’ll just keep doing it until everybody hates it.”

Before hosts Tina Fey and Amy Poehler took the stage, there were a few rocky moments during the pre-show festivities. A sprinkler malfunction caused a mini-flood on the red carpet, but the most awkward red carpet moment was provided by E!’s online red carpet live stream. A chyron that popped up after showing best comedy nominee Michael J. Fox read: “Fun fact: Michael J. Fox was diagnosed with Parkinson’s disease in 1991.” Fun? Really? E! later released an apology to the Hollywood Reporter, saying, “We understand the serious nature of the disease and sincerely apologize.”

ACTOR IN A MOVIE – COMEDY OR MUSICAL: Leonardo DiCaprio, “The Wolf of Wall Street”

TV MOVIE OR MINISERES: “Behind the Candelabra” (HBO)

ACTRESS IN A SERIES, MINISERIES OR MADE FOR TV MOVIE: Elisabeth Moss – “Top of the Lake” (Sundance)

SUPPORTING ACTOR IN A SERIES, MINISERIES OR MADE FOR TV MOVIE: Jacqueline Bisset – “Dancing on the Edge” (Starz)

SUPPORTING ACTOR IN A SERIES, MINISERIES OR MADE FOR TV MOVIE: Jon Voight -” Ray Donovan” (Showtime)

LEAD ACTOR IN A SERIES, MINISERIES OR MADE FOR TV MOVIE: Michael Douglas – “Behind the Candelabra” (HBO)

Photos From The Christening of Obour’s Baby Girl