Ghanaian gets world attention in ‘Spartacus’ 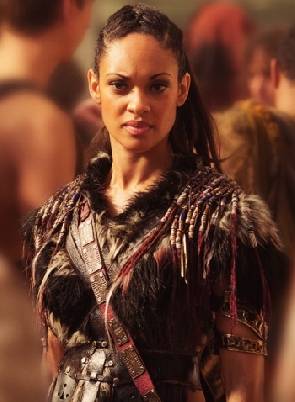 There is no doubt that all eyes are currently on popular actress of Ghanaian linage, Cynthia Addai-Robinson, for her good performance in award winning show, Spartacus.

She played the role of Naevia in season two, Spartacus: Vengeance. She joined the show after replacing Lesley-Ann Brandt who decided to exit the role. Cynthia has also been confirmed to reprise her role as Naevia in season three.

I was really excited to be a part of something that is really edgy and innovative in the world of television. The time period that Spartacus takes place in has some really great story lines and high-stakes drama, so that was something I was really excited to sink my teeth into, she was quoted by the National Urban Media online magazine to have said about her excitement for joining Spartacus.

Movie enthusiasts around the world, especially Ghana, are happy with her performance in the series. She is currently one of the most-talked-about world stars in Ghana.

Born in London to a Ghanaian mother and an American father, Addai-Robinson moved with her mother to the United States and was raised in a suburb of Washington D.C.

She was recently seen on the big screen in the Sony film “Columbiana.” Her recent television credits include recurring roles in FX’s “Dirt” and ABC’s “Flash Forward.” She has also appeared on such series as “CSI: NY,” “CSI: Miami,” and “Numbers.” She is also in Vampire Diaries.

Addai-Robinson fell in love with acting at a very young age performing in all her school plays and local productions. She furthered her love for the arts when she went on to pursue a degree in Theater at the prestigious Tisch School of the Arts at New York University. She performed in several New York Theater productions before moving to Los Angeles.