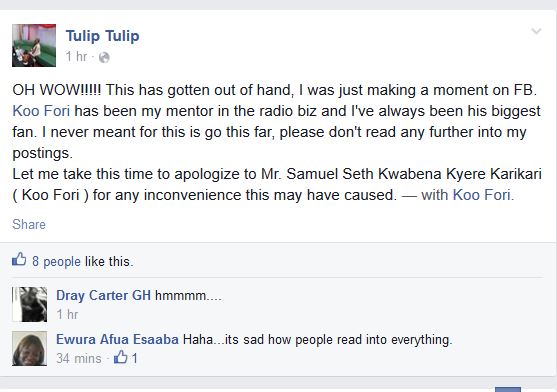 Hours after posting news on Ghanaian actor, Koo Fori grabbing a fiancee in the person of a female radio presenter (Naa Ameley Tagoe) in the United States, the said presenter has apologized and stated her posts were mere jokes and nothing else. Like seriously? Who makes a joke out of such things considering what it could cause and even for the fact that events surrounding the news were gradual?

It started with the change of relationship status on Facebook then to sharing of pictures and announcing it.

Well, I’ve had several calls and although I thought of pulling the earlier story down, I feel I would be doing a great disservice to my loyal readers hence the necessity to keep it and update you instead. Koo Fori has vehemently denied dating the said presenter and the presenter has also apologized.

Through the very same medium she announced dating Koo Fori, she has rendered an apology.

I think it is time people took responsibility for their actions and stopped blame games.

May be she just needed a bit of publicity and she had it from us.

Read it from below;