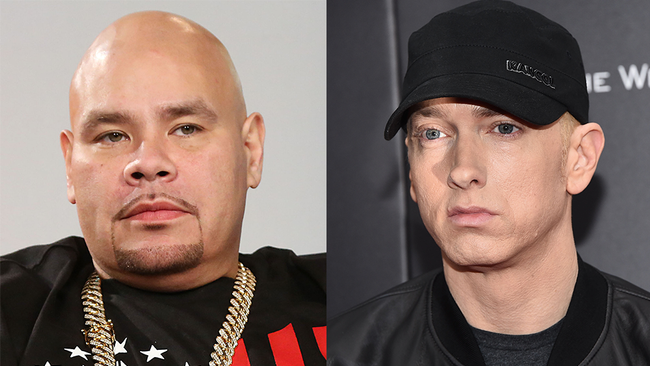 How many times have you turned down a demo from an unknown artist and considered it a worry?

Well, you could be signing the next big act if only you spent a minute to listen to that record.

According to Fat Joe, his biggest mistake in life was turning down an opportunity to sign a young Eminem after turning down his demo on six different occasions. Apparently, he didn’t even listen to them.

Although well known in hip-hop circles for discovering Big Pun, his Terror Squad imprint could’ve been bigger had Fat Joe  not slept on Eminem — six times.

Recently, 99 Jamz 99.1 FM shared a clip of a new interview with Fat Joe, in which we recounts the tale of him not giving Eminem a chance early in his career.

“Eminem out here in Miami, he gave me his demo like six different times,” Joe said about Eminem. “Everywhere I went was this little white boy and he kept giving me his demo. He was like, ‘Yo, listen to my music, I’m telling you, I’m nice, I’m nice, I’m nice.’ […] I didn’t do it and now he’s the biggest guy in the universe.”

Still, it’s not all bad for Joe, as he did discover the aforementioned Big Pun, in addition to Pitbull and Remy Ma, most notably. Also, Joe played a hand in the early development of the careers of Rick Ross and DJ Khaled, according to him.

During #JAMZLive, Fat Joe tells @supacindy and @dj_entice about the time Eminem tried to give Joe his demo tape. Joe says that he never listened to it back then. Now, he reflects on passing on one of the biggest rap artists in the world. Watch the entire interview on our YouTube channel now! #JAMZLiveFatJoe #FamilyTies #WEDR #99JAMZ