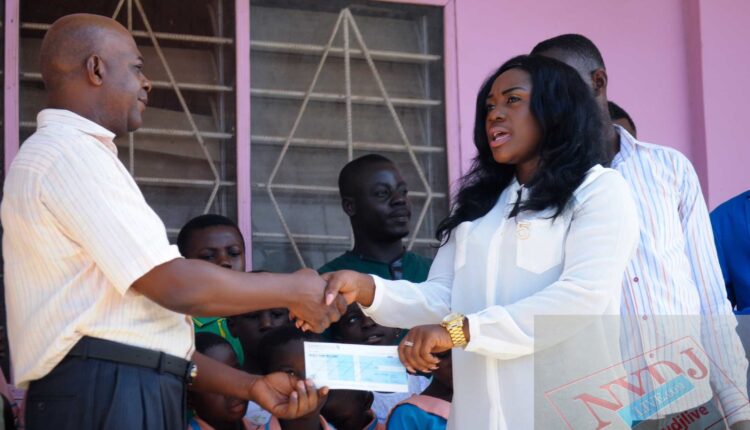 Beautiful Ghanaian actress and philanthropist Emelia Brobbey with her foundation Emelia Brobbey Charity Foundation has honoured her promise of supporting charity homes and orphanages by donating to the Cherubs Orphanage in Apire near Santase in Kumasi.

The actress together with her team and colleague actor Big Akwes on Wednesday June 8 2016 presented a cash cheque of GHC10,000 to the management of the orphanage.

Speaking during the presentation, Emelia Brobbey reaffirmed her interest in supporting the completion of a building project which has already commenced.

She also dispelled accusations that suggested she had reneged on her promise to donate to the orphanage after raising money from a musical concert held at the Golden Tulip Hotel in Kumasi.

According to her, the presentation delayed because of the team had chase a number of goodwill people who had pledged to support the donation with money.

Receiving the cash cheque on behalf of the orphanage, the Chief Executive Officer of Cherubs Orphanage, Mr. Osei Bonsu expressed his excitement and stated the orphanage was appreciative of the support and revealed the money presented was the highest amount any individual or group had ever presented to home.

Earlier, reports suggested that Kumasi based Nhyira FM had slammed her for not donating the money raised from the charity concert.

On May 7, the actress held a musical concert dubbed “SAVE THE ORPHAN” to raise funds complete classroom block at the Golden Tulip in Kumasi. The event saw in attendance a number of business folks and celebrities.