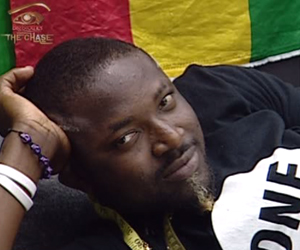 After spending an intense 75 days in the Big Brother House, dodging bullets, gossip and six prior dalliances with the Eviction guillotine, Elikem became the first Ghanaian in history to cruise through to the Big Brother Finale this afternoon.

The Ghanaian managed this stunning coup following a convincing display during the Head of House Task. Elikem is not up for possible Eviction this week, which means he is not going anywhere on Sunday. On Monday, the Ghanaian will take up his sheriff badge till next week Sunday. Thereafter, it will be all systems go for the Finale.

Before Big Brother made the HoH announcement, a hush fell over the lounge where the Housemates were gathered. It was clear something big was going to happen. As soon as Big Brother roared “Next week’s Head of House is Elikem,” his fellow Housemates congratulated him on his feat. “I wish I was in your shoes. Congratulations man. I’m sure your country is proud of you,” Dillish said, while Feza told him “Look at you being so quiet. This is a first. You’re supposed to be making noise,” the Tanzanian said.
Elikem then opened up to his fellow Chasemates as the realisation of making history dawned on him.

“If I wasn’t swapped this week, I will be the first Ghanaian to make the Big Brother finals,” Elikem said. Elikem can rest easy because Head of House put Beverly up instead.

Elikem is not only in the Finale but also made history today by becoming the first Chasemate to win ‘Power of No’ and ‘Head of House’ in the same week.

It has certainly been a tough road for Elikem. The Ghanaian should be proud of himself for making it this far. Congratulations are in order! Ghana, bring out the champagne. Your boy did it!

Cleo, Dillish and Feza are up for possible Eviction this week. Vote here to keep your favourite Housemate in the game.

Stay tuned to DStv channels 197 and 198 for all your Big Brother Africa The Chase action or catch the daily shows on Africa Magic Entertainment (DStv channel 150) at 20:00 CAT.