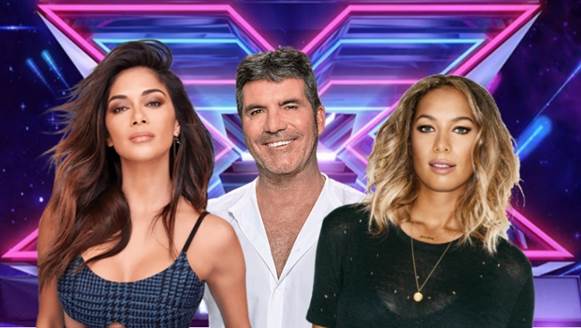 A spin off the original X Factor series, the X Factor Band simply seeks to try and find either the biggest boy or girl group in the world in record breaking time.

Simon Cowell and Nicole Scherzinger are the only judges on The Band.

The duo are expected to be helped by industry experts with Leona Lewis named as the first to sign up to help.

Simon says he wants to find a new pop phenomenon to compete with Korean K-Pop acts such as the top-selling boy band BTS. Starting Friday 13th – 21st December on M-Net (101) at 6pm.

On Untold Stories of Hip Hop, legendary radio show host Angie Martinez sits down for tell-all interviews with the biggest names in hip-hop, including Cardi B, Snoop Dogg, Queen Latifah and others. Known as the “Voice of New York,” Martinez is famous for her news-breaking interviews with Jay-Z, R. Kelly, Chris Brown, The Notorious B.I.G., Tupac Shakur and President Barack Obama.

With her authentic and affable style, Martinez is celebrated for her ability to connect with interviewees who make jaw-dropping revelations and share never-before-told stories about their lives and careers.

Now, she executive produces this interview series on during which she convinces the members of hip-hop royalty to spill the tea. Other guests include Ice Cube, Nelly, A$AP Rocky, DJ Khaled, Wyclef Jean, Ja Rule, Fat Joe and others. Watch this brand-new series on 1Magic (CH 103) at 8pm starting Monday 9th December – 13th January 2021.

Filmed on location in New York, the drama showcases the sometimes-complex process of determining guilt or innocence, while lives hang in the balance. Often inspired by the latest headlines, the plots highlight legal, ethical or personal dilemmas to which people can relate. Law & Order – Special Victims Unit shows Wednesdays 6pm on Universal Channel

At a holiday masquerade ball, fledgling event planner Angie Wells and wealthy playboy Nicholas Karmichael, who needs to marry to retain his inheritance, meet and fall for each other anonymously. While Nicholas tries to locate the girl of his dreams, Angie must choose between pursuing her lifelong dream of running a business or following her heart. Don’t miss A Cinderella Christmas this Saturday 14th December on Lifetime (CH 131) at 5:20pm

Gellert Grindelwald plans to raise an army of wizards to rule over non-magical beings. In response, Newt Scamander’s former professor, Albus Dumbledore, seeks his help to stop him. Fantastic Beasts The Crimes of Grindelwald this Sunday at 6pm on M-Net (CH 101)

Albert Lin investigates two great stories of the Bible: Could real events lie behind the parting of the Red Sea and the destruction of Sodom and Gomorrah? Join Albert as he goes on this journey to uncover The Buried Secrets of the Bible, Friday 13th December on National Geographic (CH 181) at 7pm.

Follow the journey of Amma, a strong woman who fights for what is right and takes a heroic stand against foreign rule. Deserted by her husband and son, Amma is forced to fend for herself and her two daughters. Will her fearlessness see her rise to the top? Watch  Amma every day at 5pm on ZEE World (116).

Peppa is a preschool, outgoing pig who participates in many energetic activities. Every day, she learns something new and has a lot of fun with her family and friends. New episodes of Peppa Pig showing week days at 8am on nick TOONS (CH 308)

TRACE, the first destination for the latest urban and afro-urban – celebrity news, music, lifestyle, entertainment and culture, has partnered with the MultiChoice Group to officially launch their dedicated gospel channel, TRACE Gospel across the African continent on DStv channel 332.

The 24-hour channel will offer a diverse offering of programming that will include: