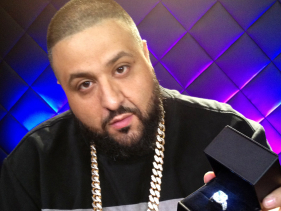 DJ Khaled is all about unity. When he drops his seventh album, Suffering From Success, on September 24, he will no doubt bring together rap’s top names for a collection of all-star tracks, but lately Khaled is looking for another type of union.

On Thursday (July 25), the charismatic hitmaker proposed to his YMCMB labelmate Nicki Minaj in front of our MTV News cameras. “Nicki Minaj, I’m at MTV, I’m going to be honest with you; I love you,” Khaled said to camera, speaking directly to Pink Friday MC. “I like you, I want you, I want you to be mine.”

Khaled had a lot to get off of his chest, first telling Nicki how he feels about her, before he popped the big question: “Nicki Minaj, will you marry me?”

The We the Best CEO was clear and direct with his message. In fact Khaled is so serious that he came to our studio with a 10 karat radiant cut diamond ring from Rafaello & Co. in Manhattan’s famed diamond district. The ring is valued at about $500,000.

“We got the same symptoms, we’re both suffering from success,” he said, noting Minaj’s hectic schedule which includes live shows, recording sessions and filming “The Other Woman” alongside actress Cameron Diaz. “[If] you gotta take your time and think about it, I overstand, but I know I have to be here today to let you know how serious I am and how serious this is to me.”

So what’s it going to be Nicki?